Written by: Chandra Verma (Hydro, Inc.)
Publisher: Pumps & Systems / August 2016
Despite well-documented pump system standards and basic requirements, omission of certain crucial design steps remains a problem in the industry, often causing disastrous outcomes for the end user. When suppliers, manufacturers and/or contractors take shortcuts, technical and commercial risk can present serious ramifications for a large project.Communication failures between the end user’s staff, suppliers and contractors can intensify problems, especially when pumps that may not be appropriate for a given job are commissioned and put into service. Without the end user’s knowledge, a facility may install pumps that have not been properly tested for the application, were fabricated to inferior standards or subject to other shortcuts that adversely affect performance.Sometimes the end user becomes aware of shortcut-derived flaws during the commissioning stage. Other times, problems in equipment or system design might not be evident immediately—they surface during subsequent plant and equipment maintenance that reveals potentially dangerous, hidden conditions. The ensuing problems can lead to tense project politics and expensive rectification, including hiring independent consultants.

Suppliers, manufacturers and contractors take shortcuts for various reasons. These shortcuts can be attributed to a lack of experience with how a pump might be deployed in the field. There may be miscommunication of technical details from both the user and supplier or between the user and contractor.

Budget constraints and concerns can also result in omissions; commercial reality can cause a manufacturer or supplier to make a project’s bottom line cheaper by reducing the cost of equipment and cutting corners. 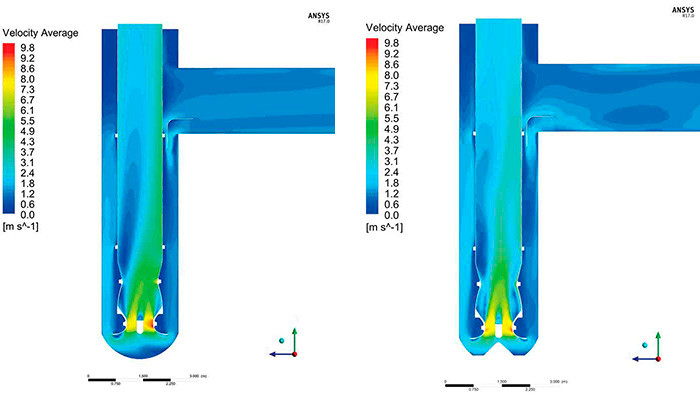 Figure 1. The velocity distribution of the original (left) and modified geometries (right)

One unfortunate case that occurred at a geothermal power station in New Zealand highlights the damage that can happen quickly when a plant takes shortcuts. Four relatively large, single-stage vertical pumps—characterized by a capacity of 45,000 gallons per minute (gpm) at 75 feet, 590 revolutions per minute (rpm) and 1,200-horsepower (hp) motors—were installed in canisters in a hotwell application (two per turbine).

During commissioning, the pumps experienced unusual noise and vibration. The step change in the vibration level of one of the pumps prompted removal after seven weeks.

Inspection of this pump and its partner revealed several failures including severe impeller-vane cavitation, a broken impeller vane, impeller/liner rub and line-bearings wear.

A rough check on net positive suction head available (NPSHA) indicated marginal readings. However, this condition would not have caused the severe cavitation damage over such a brief period. The cavitation damage on both the suction and pressure faces of the blades, with no fixed pattern, indicated a recirculation issue; however, the pump flow was not low enough to suspect the classical problem of low-flow suction recirculation.

The root-cause investigation turned to the intake design with particular focus on suction-flow velocity disturbance at the pump bell mouth causing asymmetrical flow.

Pipe sizing and intake design were both in line with the general flow-velocity guidelines provided by the Hydraulic Institute standard ANSI/HI 9.8-1998. However, it became clear that one of the basic model test recommendations for pumps with flows higher than 40,000 gpm per pump had not been carried out.

Further investigation showed that the pump supplier had not previously used this pump in a canister application. Proper due diligence would have shown the need for a computational fluid dynamics (CFD) analysis of the sump-intake design. When this analysis was completed after the pumps were pulled, it revealed that the flow was biased toward the suction inlet pipe at the bell mouth entry. 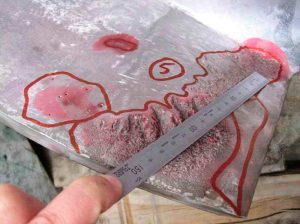 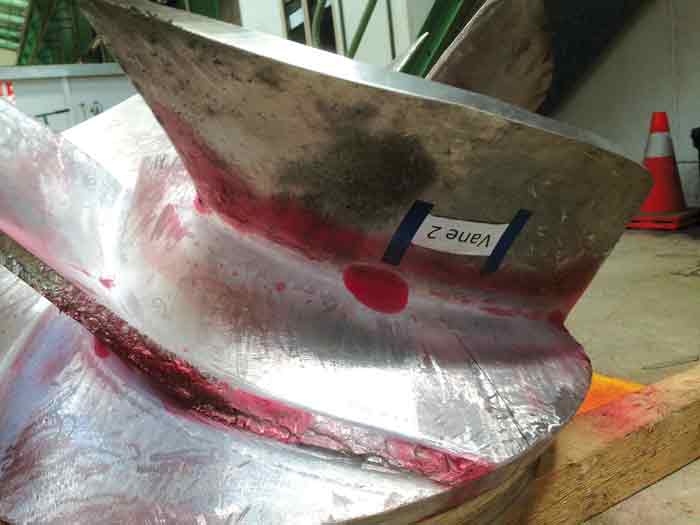 Poor casting quality led to other problems. The extent of such severe cavitation damage within seven weeks—a depth of 10 millimeters (mm) at places (see Image 1)—and the blade vane break (see Image 2) indicated an inferior product. The casting problems were reconfirmed by the surface-fracture analysis of the blade root. Numerous surface blow holes indicated gas porosity during casting.

With respect to poor-quality castings, a defect at the blade/hub root in open-vane impellers is common because of sudden changes in thickness coupled with insufficient metal feed during casting. Although not an excuse, some of the reasons for poor casting quality can be attributed to a lack of experience by new foundries. For example, sometimes an old pattern made for one material (usually cast iron) is reused for more difficult castings (e.g. stainless steel) without adequate modification to the thickness, radius and method.

After two engineering companies conducted parallel sets of CFD analysis to the intake and canister, a solution to the suction-flow velocity disturbance emerged. Trials of different geometry changes were analyzed using CFD analysis and confirmed by model tests. The concept of the installation of a hydraulic cone in each pump emerged to rectify the situation. The velocities and pressure distribution of the original and modified geometries were compared. 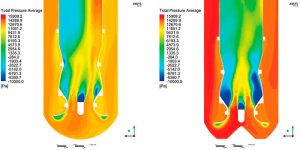 Figure 2. The pressure distribution of the original (left) and modified (right) geometries

The flow straighteners were removed and hydraulic cones were introduced to the bottom of each pump canister. These created a more uniform flow through the bell mouth throat with minimum loss. Concerning the manufacturing defects, the broken vane and severe cavitation were remedied by sourcing new impeller castings, produced under conditions with better quality control. The machining errors were also corrected.

Since the incorporation of redesigned parts, the pumps have been in operation for two years. Vibration and noise are now normal for this class of pump. Regular review by a maintenance team was recommended during the vulnerable reinstallation stage to mitigate any long-term maintenance issues.

The pump failures during commissioning can be attributed mainly to a lack of proper technical specification and communication during the tendering stage about what pump should have been procured for this application. This resulted in missed design steps required for the intake design.

The situation was aggravated by the poor manufacturing and casting quality of the pump itself. If there had been due diligence with respect to model tests and analysis prior to commissioning the pumps, appropriate modifications could have been implemented. The casting should have been subjected to cast-flow modeling software as insurance against poor-quality pump parts. Although these tests and safeguards might have increased the project cost initially, they would have reduced the life-cycle cost of the project and prevented a lot of stress.

On the manufacturing side, at minimum, quality-assurance and quality-control procedures should always be followed. Taking shortcuts in vital production elements can lead to costly maintenance and replacement expenditures, as well as reliability issues.

With respect to project communication, a review by the end user’s maintenance team should be a required process during equipment specification and selection in the tendering stage. This process should focus on the long-term maintenance effects of any pump purchase before order finalization. This step will result in significant savings in the plant’s overall life-cycle cost by allowing more appropriate choices in pump selection or offering the opportunity for pump modifications before commissioning.

This case represents just one example of why proper design steps should always be followed based on sound engineering practice. Recommendations from the Hydraulic Institute standard should be satisfied especially for new projects and equipment. Any shortcuts to this approach may lead to costly remedial action.