The Hydro Companies have provided a range of pump repair, engineering and support services to the Power Generation.

Click on any of the links to the left to learn more about our experience in improving the performance and reliability of your critical pumps.

"Having worked with and within the power industry for the past 25 years, I have gotten to know the importance of delivering a quality product, what it means to our clients and how it impacts upon them. I am proud to say that Hydro does this and is one of, if not the, major reasons for our success to date." 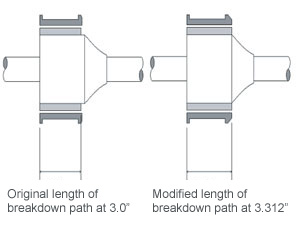 Following a catastrophic failure, a Worthington ash handling pump was pulled for emergency repair. During inspection, it was observed that the bearings had failed at both ends and the rotor had moved axially toward the non-drive end, causing the 2nd stage impeller to contact the pump casing.

In discussion with plant maintenance personnel, they advised that these pumps had an average mean-time-between-repair of 18 months and that excess running clearances accompanied by axial rotor movement had resulted in similar failures on previous occasions.

Using the detailed inspection report supplemented by data from the plant on the pump’s history, Hydro engineers developed a repair plan to address the root cause of the failure and to extend the pump’s life.

Hydro’s focus was on increasing the useful life of wear components and better handling any unbalanced axial thrust of the rotor. With the design changes implemented, Hydro increased the mean-time-between-repair from 18 months to 4 years. 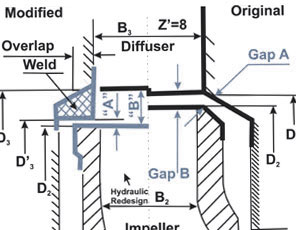 A major Power Plant had been experiencing vibration problems with their Pacific boiler feed pumps, and though repairs had been made at the plant, the mean-time-between-repair was between 6-9 months. The plant pulled the pump and sent it to Hydro for an independent evaluation.

After a thorough analysis of the system, the pump’s history, and an inspection of the pump in our shop, Hydro determined that though an A-B Gap modification was the proper solution, the previous modification had not been correctly designed.

Hydro performed the modification on the first of three pumps in 1989 and this pump ran for 11 years with no problems. When it was pulled in 2000 for routine maintenance, only a standard ring and bushing job was needed. Over time, all three pumps were modified and are still running today. 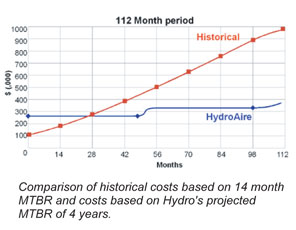 Low NPSHa (net positive suction head available) was causing cavitation damage to these condensate pumps, which were being pulled for repair every 14 months. After performing a thorough inspection of the pump and a review of the installation and operating conditions, Hydro developed a repair plan incorporating a number of recommendations.

These recommendations included interference fits on impellers, use of non-metallic materials for wear components, A-B Gap modification, rotor centralization, restoration of the pump casing, and stringent balancing to 1 W/N.

Hydro forecast that mean-time-between-repair could be extended from 14 months to 4 years, resulting in considerable savings to the station. Hydro’s estimate of the total cost savings after 56-months was $329,694. 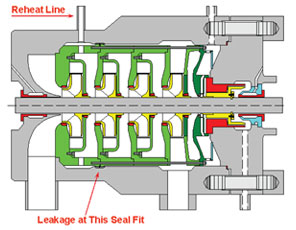 A power plant had been unable to maintain a steady generator output due to various problems with 4 of their boiler feed pumps, which ran in parallel operation but at different speeds.

Hydro completed a performance analysis of one of the pumps which revealed internal leakage past the "O" ring seal into the reheat atemperator line. The leakage, which was occurring in the reheat line and at the seal fit, was consuming 1650HP on the drive turbine. Hydro repaired the first pump in only 15 days, and soon after, installed the new improved "O" ring seal on the other three pumps.

The plant benefited with a 70 MW increased capacity and saved $261,000 in Recirculation Power Savings (annual savings of $87,000/year x 4). Hydro was informed by the plant that they had been commended for best efficiency record and continuous total MW output in the history of the station. 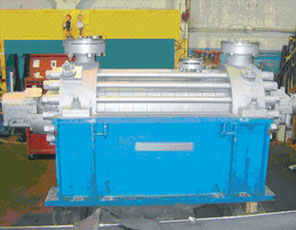 By applying the technology and engineering standards which Hydro has developed through many years of experience, we believe we can improve the mean-time-between-repair for many of the installed ring section pumps currently in operation at Cogeneration plants. 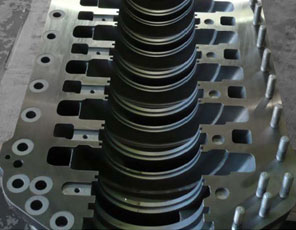 When a utility's Byron Jackson boiler feed pump lost flow and experienced excessive vibration, the pump was pulled and sent to Hydro.

Several issues were uncovered; there were abnormal clearance increases throughout all the wear components; there was severe case erosion as well as erosion at the volute bushing and take off bushing; and it was eventually learned that the pump was given too short a warm up time before start up, which caused leaks and erosion at the split lines.

The utility agreed to the upgrades and modifications suggested by Hydro and began executing a detailed installation procedure. The pump was placed in operation and after 5 years there was less than 2% degradation in performance.

Mean-time-between-repair was increased from 18 months to 6 years with an increase in overall efficiency which enabled the station to achieve an energy savings of over $100,000 per year. 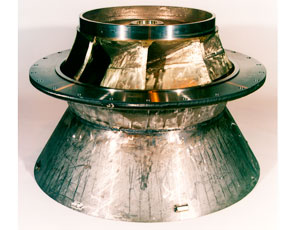 In danger of being derated during the high demand summer season, a major power plant called Hydro when their 54" mixed flow circulating water pump failed. Instead of waiting 8 months for a new suction bell and impeller, the plant employed Hydro to come up with an alternate solution.

Hydro’s engineers designed two separate cones that would be welded together from a durable stainless steel to form the new suction bell. Because the impeller's existing blades had been destroyed when the suction bell broke into two pieces, the hydraulic profile was not available. Hydro’s engineers analyzed the performance requirements of the original impeller design using CFD (computational fluid design) as well as data that was available from the existing impeller to recreate the impeller’s hydraulic profile.

Once a metallurgical analysis was performed and work with a smelter was completed, newly designed blades were cast from the same bronze material as the original base metal and then welded to the original impeller hub. The project was completed within the emergency time frame, the plant's delivery requirements were met and the pump was in service for the critical summer season. 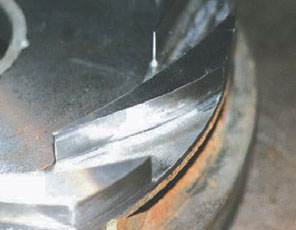 Often there are cases where it makes good engineering and economic sense to modify, upgrade or reclaim existing components rather than replacing them. When a major utility sent an auxiliary feed pump to Hydro for inspection, Hydro’s engineers developed a unique solution which offered a cost effective alternative to purchasing a new element.

Hydro’s diagnostic inspection uncovered severe vane tip cracking on the first-stage diffuser. The base material of the diffuser was cast iron, and therefore, could not be weld-repaired. Hydro’s engineers worked with our repair technicians to machine out the existing diffuser vane set and replaced it with a fully machined forged stainless steel vane set.

By the utility’s own estimate, Hydro's creative solution resulted in cost savings of upwards of $300,000. In addition, the hydraulics on the first stage was improved and the likelihood of cracking was significantly reduced.