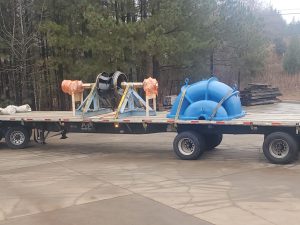 A major utility company had a Foster Wheeler 60 DF horizontal split case circulating water pump that required repair. They decided to complete the refurbishment during a 14-day unit outage by using the Hydro South service center. The plant had a spare impeller, shaft, and shaft sleeves in inventory. The availability of spare parts usually facilitates an efficient and trouble-free repair. Unfortunately, it was discovered that the parts available were not properly designed for use in the existing pump.

Before the pump was pulled for the outage, the spare parts were sent to the Hydro South facility for inspection. This is where the first problem was discovered- the threaded shaft and shaft sleeves were designed for the incorrect rotation. If they had been installed as-is, the rotation of the pump would have resulted in displacement of the sleeves. The plant elected to modify the parts to prevent the sleeves from backing off during operation. Hydro South accomplished this by drilling and tapping the sleeves for set screws and dimpling the shaft.

The second problem was discovered when the rotating element arrived at the Hydro South shop. During the dimensional inspection, it became clear that the spare impeller was much larger than the original impeller. Not only would performance be affected, but the larger suction eye of the spare impeller could not be accommodated in the existing casing. The only option available was to reuse the old impeller, which required extensive repair to the vanes.

By leveraging their experience with complex pump repair and keeping an open line of communication with the plant, the Hydro South shop developed a work scope that addressed the problem. They completed the refurbishment within 8 days, which allowed the plant to maintain their 14-day outage schedule. Because the problem was identified and addressed quickly and efficiently, the plant can expect reliable operation of their pump for the rest of the plant operating life.