Modifications can be made to many older pumps to improve on their original design. Pump rebuilders with experienced engineering staffs can provide these modifications and upgrades to substantially extend mean time between repair (MTBR) and increase pump longevity. In the following case history, an ash handling water pump that had been experiencing a short operational history was removed from service on an emergency basis because of catastrophic bearing failure caused by poor lubrication.

This pump was shipped to the service center where it was disassembled and inspected. It was observed that the bearings had failed and the rotor had moved axially toward the non-drive end, allowing the second stage impeller to contact the pump casing (see Figure 1). 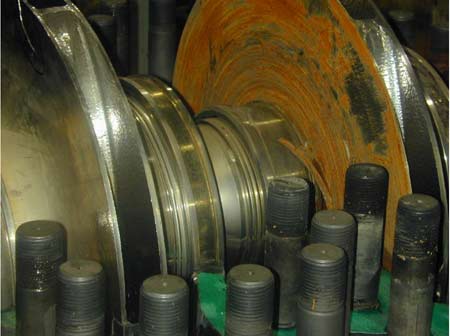 Excessive wear was noted at all running clearances. Discussions with the plant subsequently revealed that these pumps have an average MTBR of 18 months. Excess running clearances accompanied by rotor axial movement have resulted in similar failures on sister pumps.

During disassembly, it was observed that there was not much evidence of any residual lubricant inside the bearing housing on the non-drive end side. There was rust build-up on the bearing debris (see Figure 2). 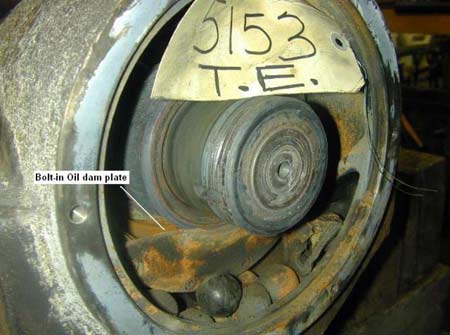 As part of the service center’s dimensional inspection, the pump casing split line faces were inspected for flatness. It was observed that the casing split line faces adjacent to the second stage impeller, toward the non-drive side, had low spots. When the casing halves were assembled without any shims at the split line face, gaps measuring from 0.010-in to 0.020-in were observed between the top half and the bottom half at the split lines in these areas. Since this would also form the fit for the balance drum bushing separating the high pressure side from the suction side, this could have provided a possible leakage path (see Figure 3). 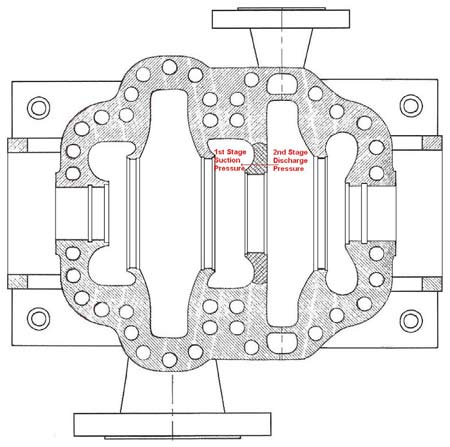 The following design changes were implemented in this repair:

The wear ring configurations were changed from “saw tooth” to “smooth.” The idea was to allow a smooth passage for any abrasive particles without creating turbulent conditions that would affect the wear surfaces (see Figure 4 and 5).

All wear rings were coated with 88-12 tungsten carbide 0.020-in thick. The coating would present a hard wearing surface on the wear components.

The breakdown path length between the balance drum ring (rotary) and the balance drum bushing (stationary) was increased to help slow down the erosion of the running clearances (see Figure 6). 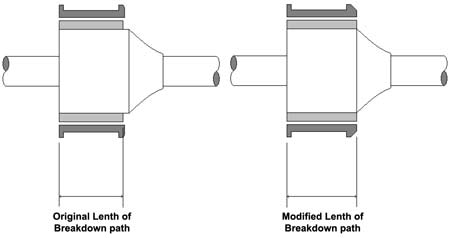 The thrust bearings were replaced to allow equal axial thrust carrying capacity in either direction.

A 3/8-in diameter oil drain hole was added in the bearing bore at the 6:00 position, which eliminated bolt-in bearing housing oil dams. This would allow oil to be drained away from the bearings without any contaminants settling close to the bearings.

As part of the rebuild, the pump case fits were also welded and re-machined to restore OEM sizes and flatness. The pump was reassembled with new wear components and new bearings and was then shipped to the station.

During installation, the service center personnel set the pump in position and connected its discharge and suction flanges to the plant piping before securing the pump feet. The purpose of this was to ensure that the pump was not under stress because of the piping. They then proceeded to align the motor to the pump. After confirming the direction of rotation, they performed a no-load run of the motor to locate its magnetic center. It was observed that the gap between the coupling hubs was 0.820-in (compared to an OEM recommended gap of 0.218-in). This may have been a preexisting condition. The only way to close this gap would have been to pull the motor rotor toward the pump and disturb its magnetic center.

To keep the motor running at its magnetic center, the service center manufactured two spacers (one for each coupling hub) to bridge this gap (see Figure 8) and completed the alignment using laser alignment equipment. 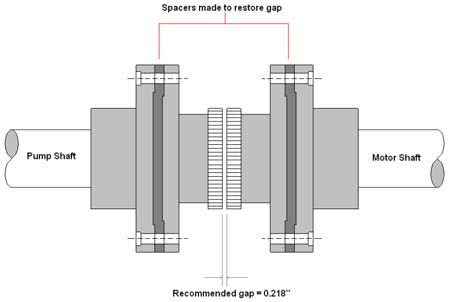 Once pump alignment was completed, the split mechanical seals were assembled and all remaining connections were restored to complete the pump installation. Oil was filled in the bearing housings as per marked levels. At start-up, it was observed that bearing temperatures were within required limits. It was later confirmed by the plant that the pump vibration levels were much lower compared to other similar pumps.

Most plants have some problem pumps. The problem may be the result of the application, changes in the way pumps are being operated, system problems or poor quality repairs. Maintenance personnel may come to accept frequent repairs as the norm for that pump or application, but this does not need to be the case.

Working with a pump service center that has in-house engineering support can make a difference in developing a repair plan that will extend the pump’s MTBR. A thorough inspection combined with a pump history based on discussion with the plant’s maintenance staff can provide the basis for analyzing the cause of the pump’s frequent repair cycle. As in this case, the engineer can then recommend both corrective actions and upgrades to extend the pump’s life. Engineering is at the heart of a quality repair.