The population of industrial pumps is aging. An article from Pumps & Systems’ August 2012 issue chronicled a repair done on an 82-year old pump still in service in a major refinery (click here to read that article). Like this refinery, many industrial operations are using pumps that have been in service 30 to 50 years or more. It is clear the infrastructure of industry is at risk due to the lack of planning by the pump owners and the more limited support from the companies that provided the pumps. To be fair to the pump OEMs, these pumps have been kept in service much longer than a pump OEM would have originally anticipated.

This article will present a case study of a recently refurbished vertical pump, show how the lack of a critical part was overcome through reverse engineering, and will share lessons learned for developing a strategy to overcome part shortages for old or obsolete pumping equipment.

This single-stage vertical pump in a service water application was sent for repair by a nuclear power plant to Hydro Inc., a reliable independent pump service and engineering provider. A thorough inspection was performed, and although several important parts had to be reverse engineered and manufactured, all but one were machined parts for which raw material was available. One large cast part, a large aluminum bronze suction bowl weighing more than 500 pounds, was identified as the “critical delivery” issue. 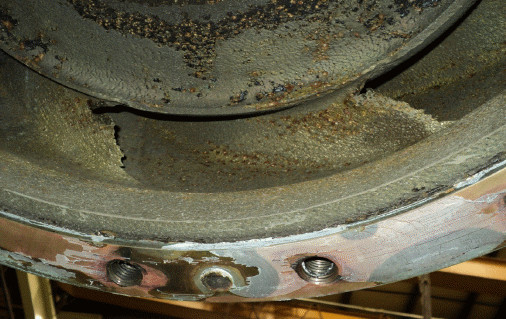 Hydro’s engineers started the process by producing a 3-dimensional model and a 2-dimensional drawing of the suction bowl, capturing the part geometry with the aid of a state-of-the-art coordinate measurement machine (CMM). The portable CMM, with 7-axis articulation and equipped with both contact and non-contact (laser) probes, enabled Hydro’s engineers to quickly capture dimensions of the suction bowl with high precision. To address the missing geometry of the eroded vanes, an engineering analysis was performed to reconstruct the original geometry and create the 3D model. In addition to measuring the geometry of the part, all critical characteristics (hardness, chemical composition, surface finish, fits and tolerances, etc.) were evaluated.

The reverse engineered data of the bowl’s hydraulic passageways was then thoroughly reviewed. This included vane-to-vane distance, vane curvature from the leading edge to the trailing edge, hub and shroud curvature, vane thickness distribution, and all other critical dimensions. The hydraulic contours of the 3D model were then smoothed without significantly affecting the original geometry and the vane thickness distribution was made uniform. The 3D model developed for the casting was completed by adding machining allowances for bores, flange outer diameters, and faces.

Once the 3D model for the casting was complete, Hydro’s engineers worked with a reliable foundry known for producing excellent aluminum bronze castings to develop a manufacturing and quality plan to cast the replacement suction bowl. With a thorough understanding of the latest rapid casting processes, Hydro’s engineering team created a casting plan that included a layout for the risers, gates, runners, sprue, etc. This plan was engineered using solidification simulation software so Hydro’s engineers could determine the optimal layout for the mold package. Having a well-designed mold package meant reducing risk of a failed casting and maintaining the rebuild schedule. 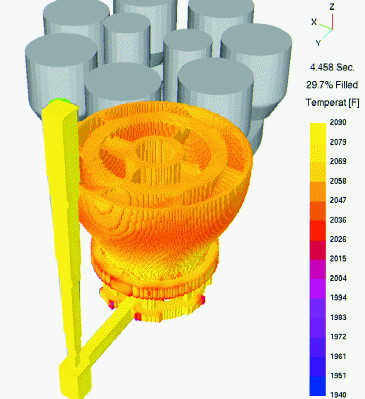 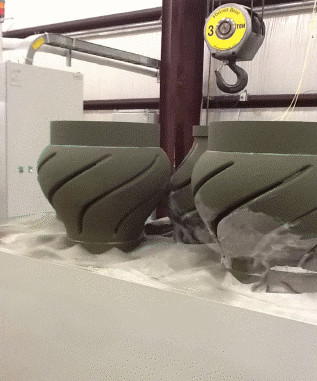 Once the casting plan was complete, the 3D model was used to make a very large sand-printed mold package. The mold package consisted of several mold pieces and a large core for creating the intricate details within the bowl. Utilizing this modern technology enabled Hydro to produce a successful casting in a timely manner without a hard pattern or core box.

The cast suction bowl was sent back to Hydro’s service center for inspection by Hydro’s Quality Assurance team. The chemical and physical characteristics were analyzed and found to be within the ASTM ranges. It was also observed that the casting’s surface finish exceeded the surface quality of conventional castings for the given material.

The suction bowl was finish machined, and after passing another inspection by Hydro’s Quality Assurance team, the vertical pump was rebuilt using the proper assembly procedures. The completed pump was then performance tested at the Hydro’s independent Test :ab. The test results confirmed the pump’s performance with improved efficiency and proved the integrity of the reverse engineered part. The nuclear power plant accepted the certified test report and returned the vertical pump back into safety-related service.Comparison of 3D models (Image Courtesy of Hydro Inc.) 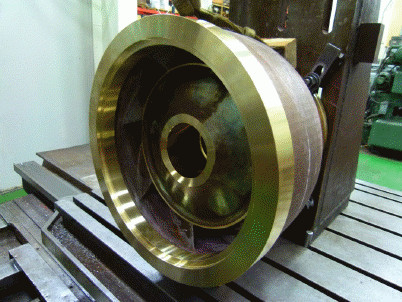 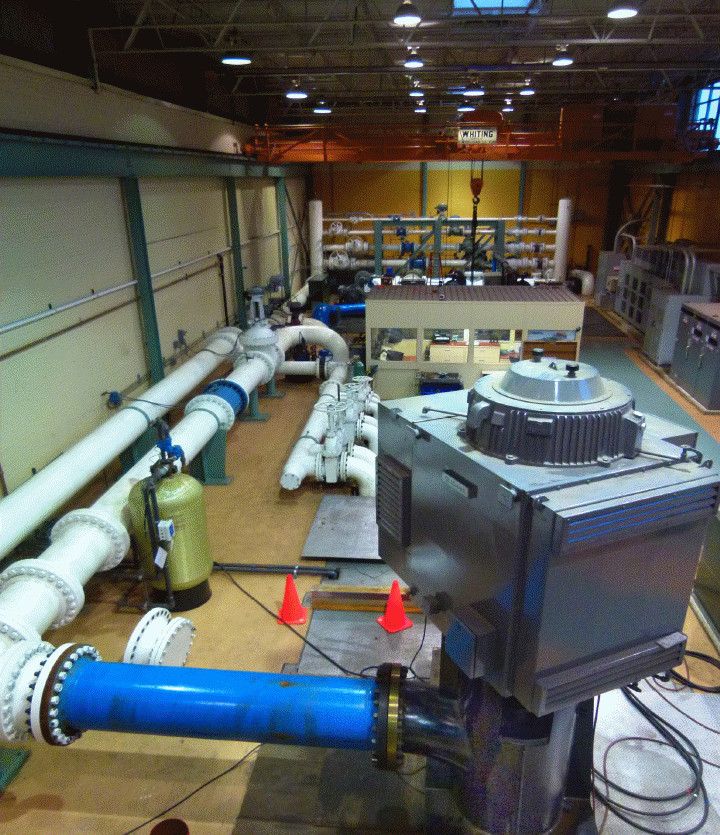 Developing Your Strategy for Difficult-to-Source Parts

As this case study clearly demonstrates, the ability to reverse engineer and manufacture major pump components – especially cast components – coupled with the experience necessary to repair and performance test those pumps has proven to be an effective method of extending the life of older pumps. To adopt this concept as a strategy requires that the pump owners establish these steps as part of their long term “supply stream” strategy and fund the personnel and systems necessary to put the strategy on a successful path forward:

Utilizing the above steps will clearly not solve all problems. At some point, new pumps must be engineered into the system and old pumps must go into the “scrap bin”. However, an active program to extend the life of the pump population currently in use will save significant amounts of money now and for years to come.