Being Independent Makes All the Difference

As electricity demand changed and combined cycle plants began replacing conventional thermal power plants, the type of pumps utilized has changed as well. Thermal power plants use robust, long lasting, reliable barrel pumps. For example, boiler feed pumps in conventional thermal power plants are designed and built with the “spare no expense” mindset. These pumps operate for long uninterrupted periods of time and plants are generally fitted with two 100% or three 50% installed pumps per unit. Additionally, the pumps are designed with a double jacketed pressure containing device commonly referred to as a barrel (BB5).

Combined cycle plants have been designed and built with the “low bid process” mindset which drive new equipment to be built as inexpensively as possible. The demand for robust, yet expensive, barrel pumps dropped, and demand rose for less expensive and inherently less reliable segmental rings pumps (BB4) with only one 100% pump per unit installation.

Additionally, combined cycle plants are not designed for “base loading” where a plant is called to run for long uninterrupted periods of time. Instead, these plants are required to quickly react to the power grid demand which results in frequent starts and stops. Combined cycle plants often operate with less robust pumps in a more severe service resulting in lower MTBR, extremely high internal wear issues, high vibration issues, and a myriad of unexpected critical failures.

"Hydro faced a steep learning curve in dealing with different failure modes, attempting to understand the logic behind the OEM’s design, and eventually finding solutions to every single problem that cycling power plants and segmental ring pumps posed to us. Many hidden, inherited “built it” OEM problems were uncovered, redesigned and improved on, making Hydro a top tier rebuilder of BB4 pumps. Some of our repairs have survived more than 486 starts and stops in four years without any signs of performance deterioration."

Click on any of the links to the left to learn more about our experience in improving the performance and reliability of your critical pumps.

A power utility was experiencing problems with many of its multistage ring section (BB4) pumps in several of their plants.

In this case, Hydro was able to develop a long-term engineering solution for the unit in focus, and with the help of Hydro's independent test lab in Chicago, Illinois, they were able to provide performance testing and verification of the upgrades prior to installation. 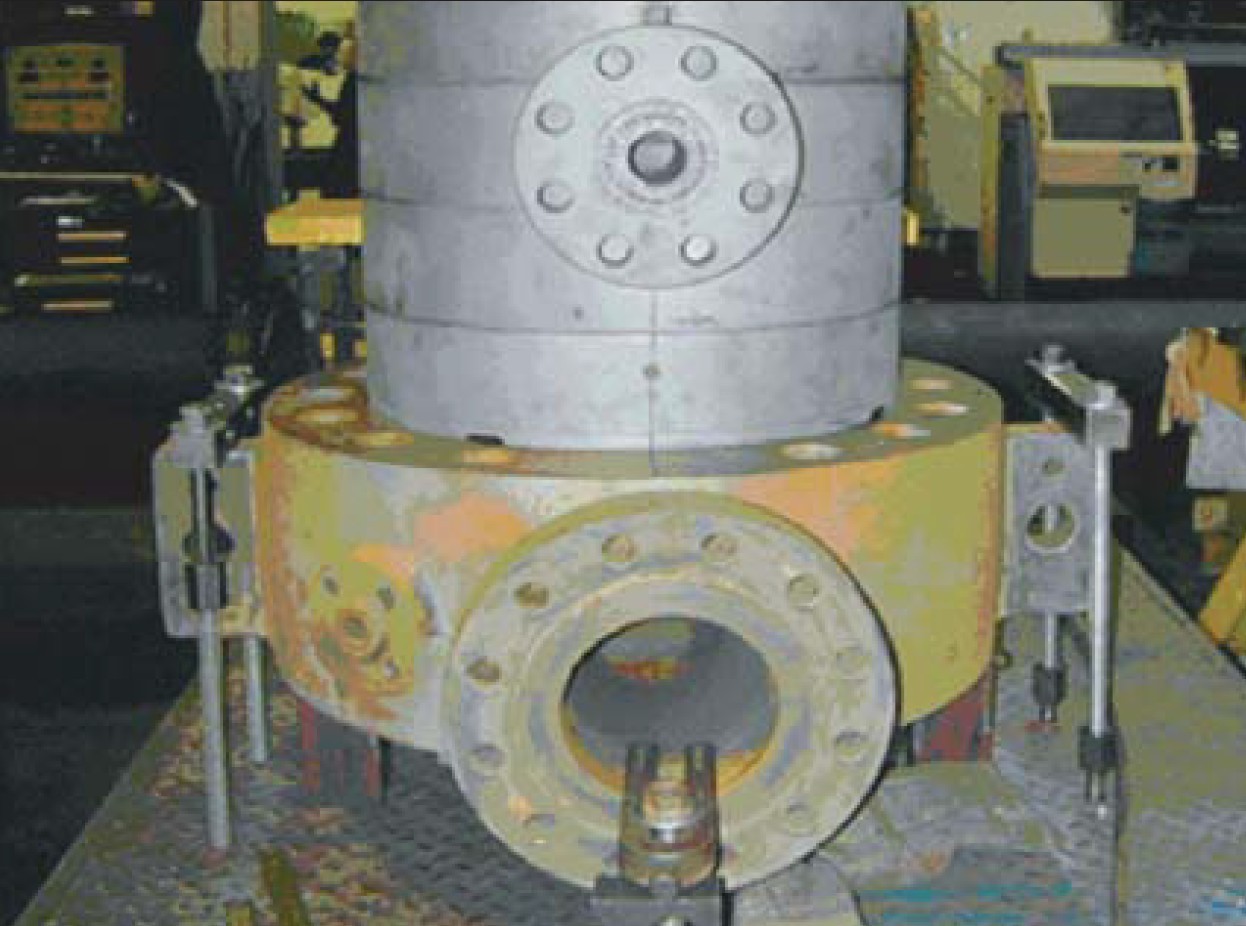 A utility’s ring section pump was continually failing in service, resulting in high maintenance and operating costs to the plant.

Hydro tightened the fit between the covers as well as the fit between the shaft and the impellers. This ensured concentric running clearances throughout the entire length of the pump. To eliminate the problem of contact between the rotating and stationary faces in the axial direction, Hydro manufactured a balancing disc with a tapered face. Hydro performed its rotor centralization process and modified the rotor to ensure perfect alignment between rotating and stationary hydraulic passageways.

While ring section pumps are much less costly to manufacture, they are not built to the same exacting standards as highenergy barrel pumps. As a result, their MTBR will be much shorter than for a barrel pump. However, by applying the technology and engineering standards which Hydro has developed through many years of experience with barrel pumps, we believe that we can improve the MTBR for many of the installed ring section pumps. 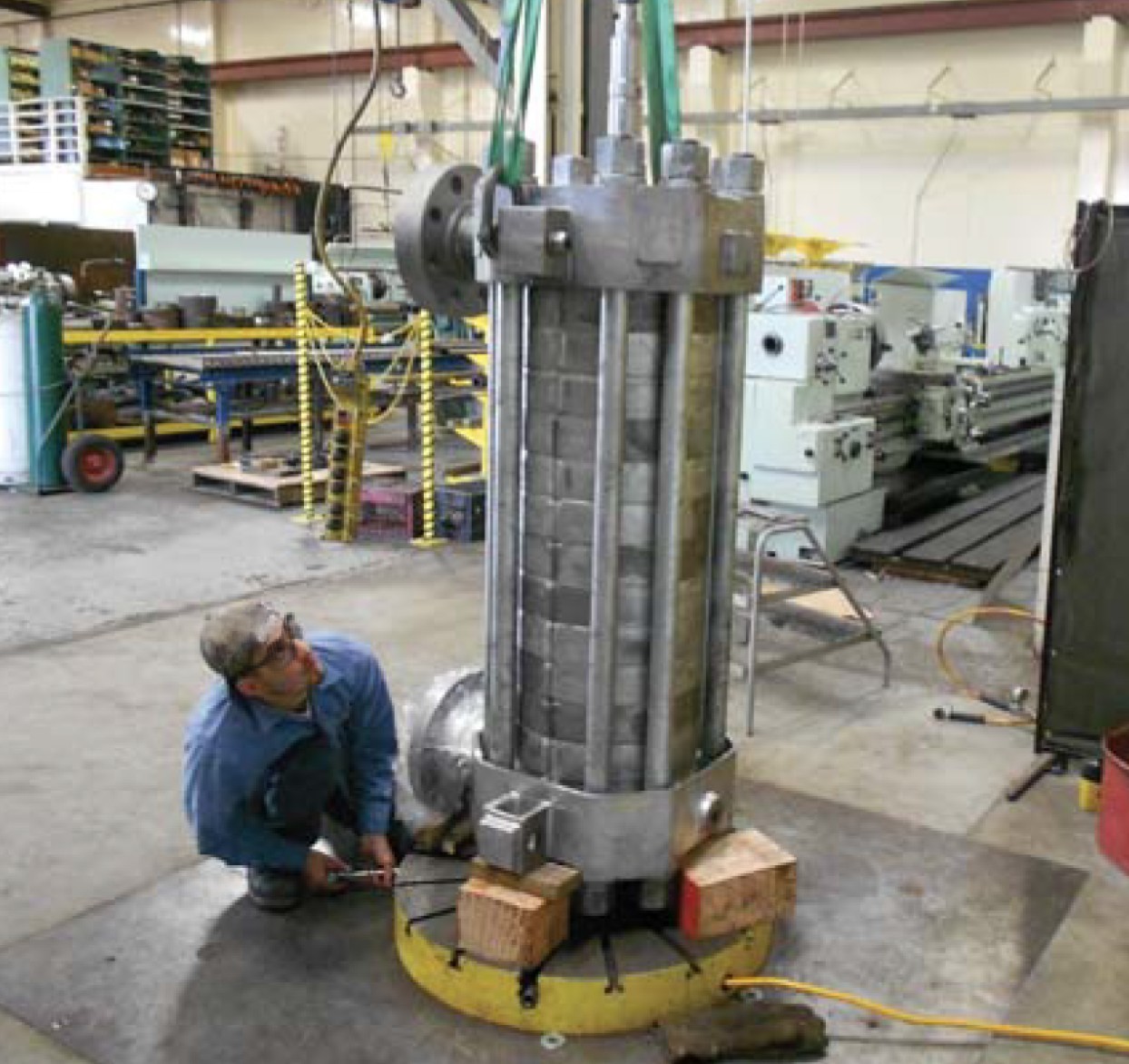 A 1000MW natural gas-fired combined cycle facility in California's central valley worked with Hydro to rebuild their 13-stage ring section pumps. The boiler feed pump exhibited problems after operating only 30 hours from the time it was installed by a previous repair provider.

Hydro's engineers discovered that the balance sleeve had a tapered fit onto the shaft, which was a design long abandoned by most major manufacturers due to inherent design problems and associated safety concerns. The plant accepted Hydro's proposal to upgrade the shaft journal and balance sleeve to a straight interference fit.

This engineered upgrade would benefit the combined cycle plant in the following ways:

Once the rebuild was complete, the pump was sent to Hydro's Test Lab in Chicago for an NPSH test and a performance test, both of which confirmed positive results. 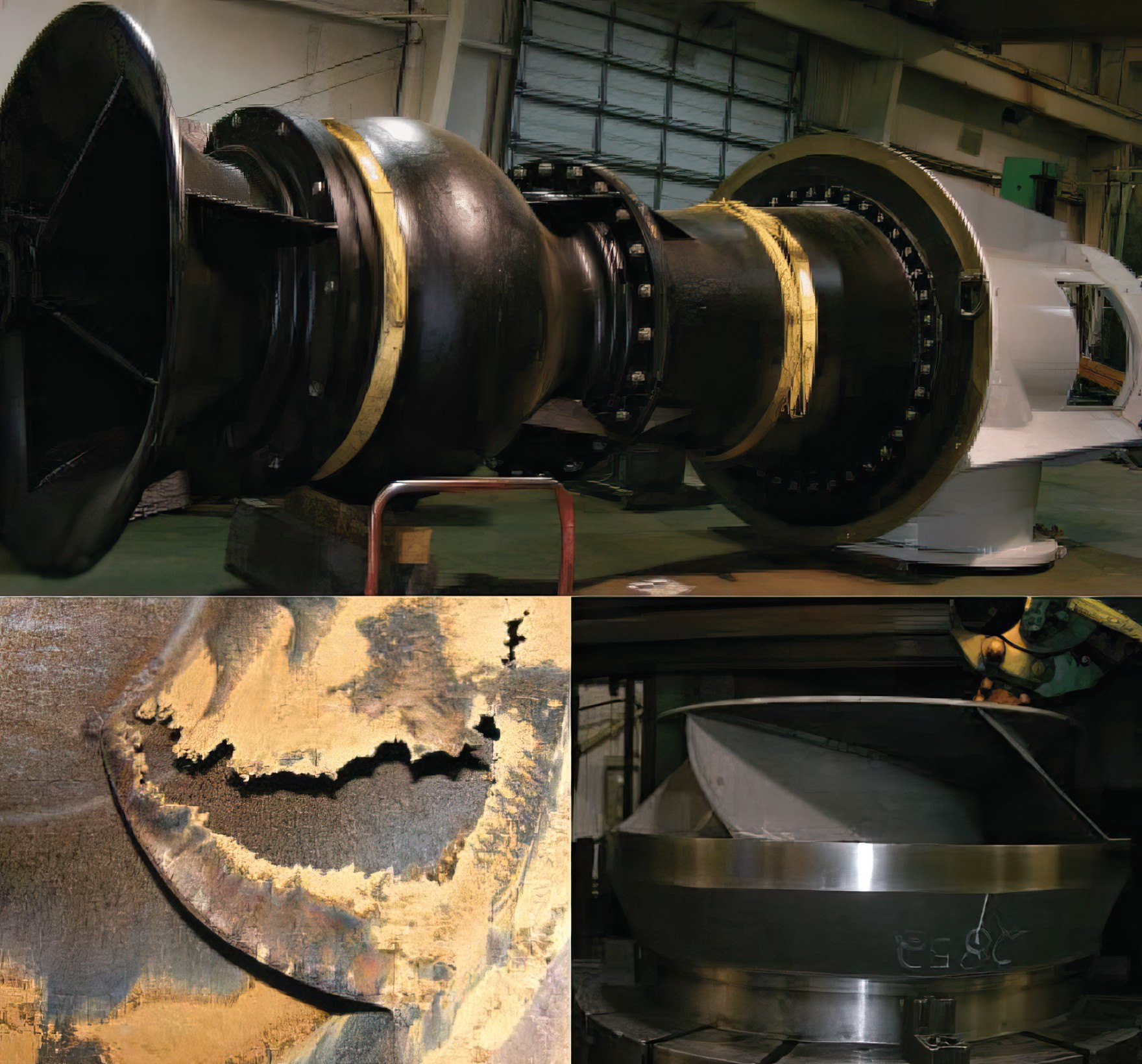 A 620MW combined cycle power plant located in the Southwest US was being sold. Per the plant sale agreement, all equipment needed to operate at optimum levels prior to the sale closure at the end of the year.

To meet the sale agreement, the pump needed to be removed, repaired, and returned by the end of the year.

Hydro was commissioned to pull the pump and prepare it for shipment to Hydro's service center in Houston, TX. Hydro’s Field Service group was staged and immediately dispatched to facilitate the removal of the pump unit.

When the unit arrived in Texas, it was disassembled and inspected on an expedited basis. Several remedial actions were quickly identified. Parts, such as sleeve bushings, needed to be replaced. Weld repairs and machining were recommended for out-of-tolerance components. The shaft needed to be repaired and the total indicated runout brought within acceptable limits.

The most dramatic issue identified was damage to the impeller, which was severely worn with large holes in each of the five vanes. Engineers and coating specialists evaluated the efficacy of repairing the impeller by applying an epoxy coating to fill the voids in the impeller vanes. This process was determined to be insufficient and could not be guaranteed after repair.

It was estimated that the repairs stated for all other components could be accomplished in a relatively short period of time. However, the best delivery quoted by the OEM for a new impeller was 16-20 weeks.

In light of the long lead time quoted by the OEM, other resources had to be engaged to provide an impeller in the accelerated schedule required by the customer. Hydro Parts Solutions (HPS) was called in to engineer and manufacture a replacement impeller in an expedited time frame. HPS immediately visited the Houston service center to reverse engineer the impeller using state-of-the-art tools and technology that provide a full dimensional analysis. Anticipated delivery for the new impeller was estimated at 8-10 weeks, half of what the OEM originally quoted.

While the impeller was manufactured by HPS, repairs proceeded on the other pump components at Hydro's Texas service center. The new impeller was reverse engineered, cast, machined, inspected, and delivered within eight weeks of the work release. The final product was scanned using the coordinate measuring machine and this scan was mapped onto the original dimensional analysis to ensure conformity to the original design.

The pump was assembled and prepared for shipment within nine weeks of its release to manufacturing. Hydro's Field Service group was again deployed to reinstall the pump onsite as soon as the refurbishment was completed.

Better Than New in a Fraction of the Time

In many cases, ordering a replacement part to original specifications through the OEM is subject to significant backlog times. Hydro Parts Solutions is able to cast parts of the highest quality, within a much shorter lead time.

Hydro has engineered hundreds of combined cycle pump repairs and upgrades. Our exacting tolerances and assembly procedures are often more stringent than those originally provided by the OEM, resulting in a more rugged, reliable pump. 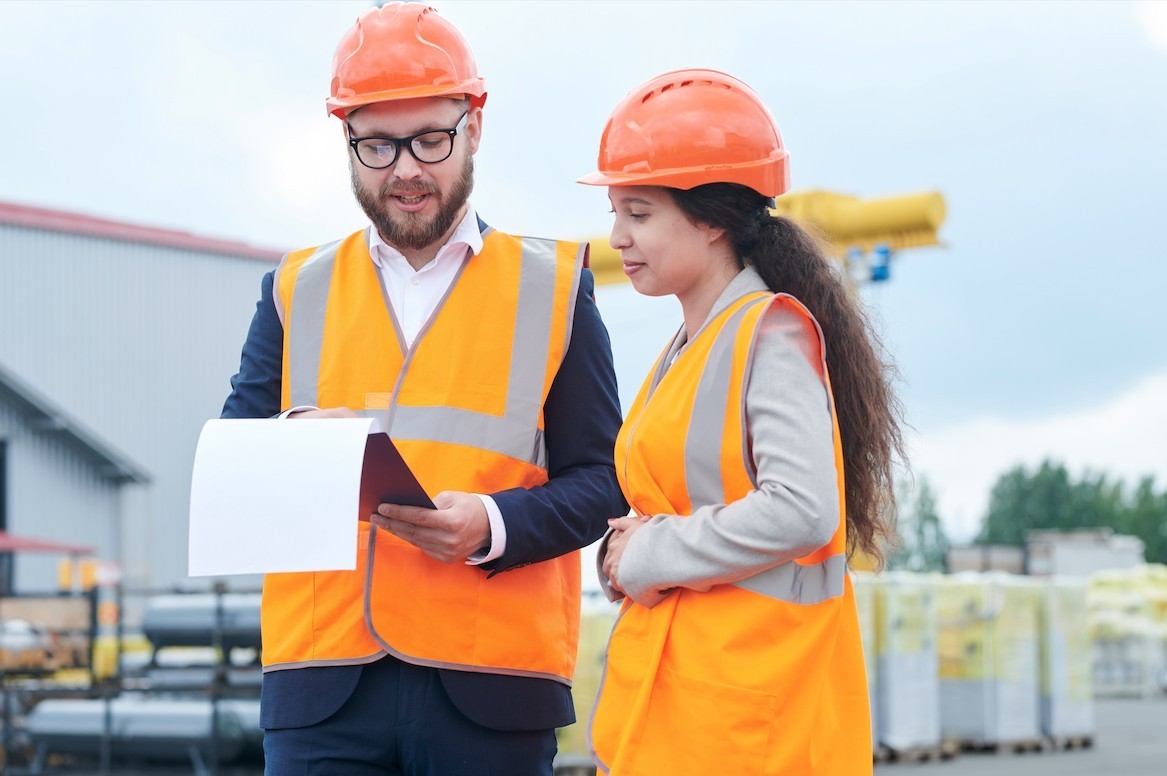 Hydro starts every new project by truly understanding the pumps and how they act in their operating environment. Each of the boiler feed pumps was designed for 100% of the required heat recovery steam generator (HRSG) flow. In one of the units, two pumps were required to meet the system flow when the unit goes on duct burners. The inability of the single pump to provide the required flow suggested that the pump’s performance may have degraded.

HRS tests confirmed that one of the boiler feed pumps had a severe leak between the discharge head and the last stage channel ring. This presented a significant safety concern, as the layer of insulation was the only barrier containing a spray of high-pressure hot feedwater.

Flow measurements revealed that one boiler feed pump was operating 5.5% below design efficiency, which resulted in additional operating costs of approximately $48,000 per year. Implementing recommended pump improvements not only improved reliability and safety, but it reduced operating costs by this amount. 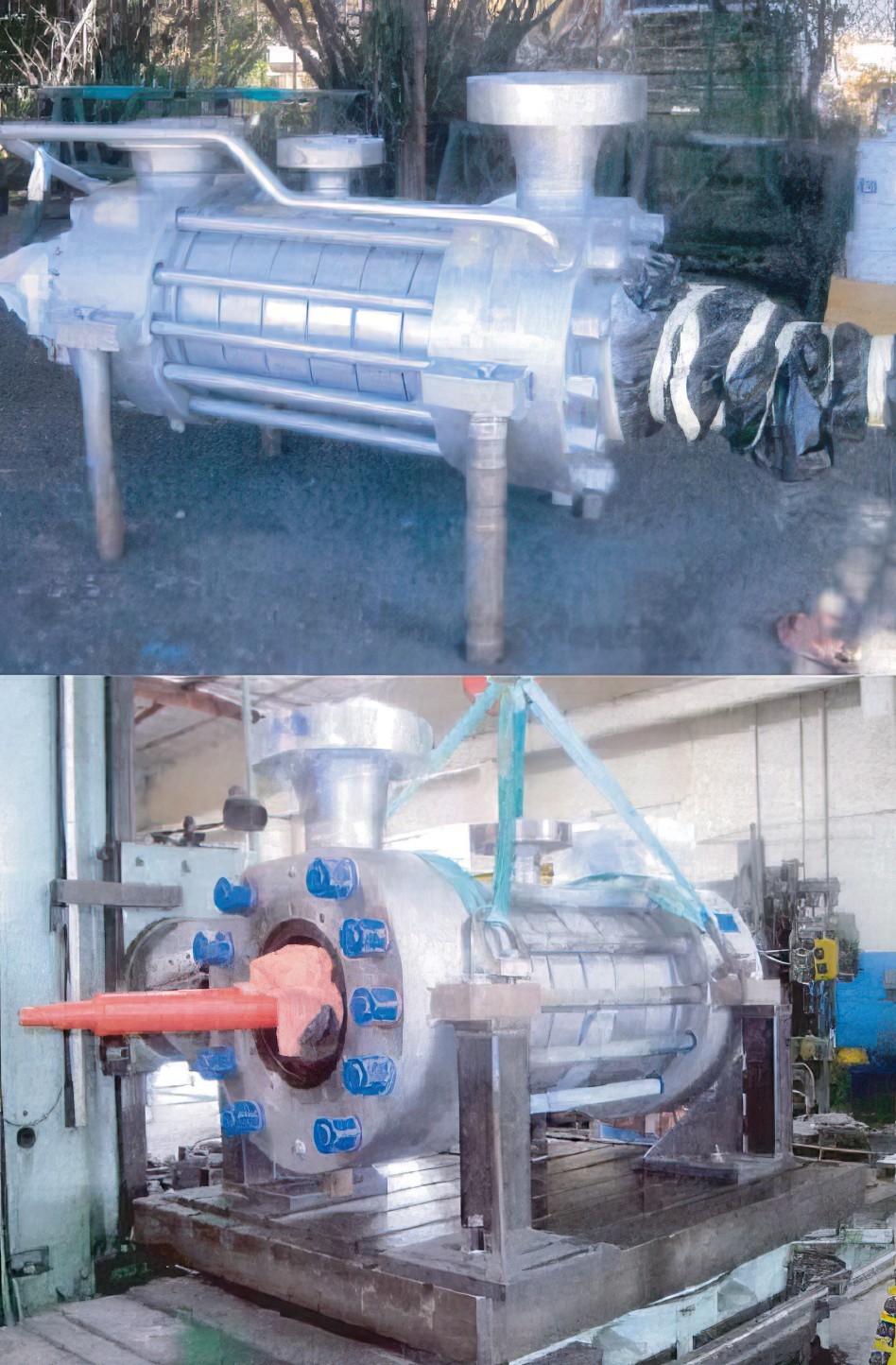 The relationship and geometry of the impeller to the diffuser are extremely important in high energy multistage pumps. This observation is especially true in ring section pumps, where the design is less rugged than a traditional multistage barrel pump. When properly designed, the geometry at the discharge area of the impeller, commonly referred to as Gap A and Overlap, counteracts the negative effects of hydraulic instability. When left unchecked, this instability can be very detrimental to pump health.

The geometry at the impeller-to-diffuser interface has both a radial and axial component. Because it has an axial component, it is rendered ineffective when the impeller is offset within the diffuser. In most cases, the OEM or subsequent refurbishers do not perform the due diligence A KSB HGC series pump in Hydro's shop necessary to center each impeller in its respective diffuser. This non-centralization results in turbulent flow, which in turn causes high vibration, increased stress on all components, and reduced efficiency.

In Hydro's drive to increase pump reliability and extend pump life, we have pioneered a process we refer to as Rotor Centralization. Hydro performs a detailed dimensional analysis to establish the centerline relationship of the pump's stationary and rotating components. The rotor is then modified to ensure centerline compatibility at each stage of the pump. While most service centers do not perform the work necessary to achieve axial rotor centralization, Hydro has made this process standard for all multistage diffuser pumps.

The balance device balances the axial thrust of the pump during operation, significantly reducing the load on the thrust bearing. A flanged balance disc, which includes both an axial and a radial clearance, is a self-compensating device capable of balancing this load at any operating point. This design has significant benefits over a straight balance device, but it also has its own risks.

The axial clearance between the balance disc and balance drum is extremely small, generally 0.001 – 0.003”. If these faces touch during startup, the pump will seize and cause a catastrophic failure.

Because the flanged disc will naturally flex outward, the most likely area of contact is at the bottom of the axial clearance. Providing a negative taper on the balance drum makes the most likely point of contact at the top of the axial clearance. This change allows pressure to build below the contact point, forcing the faces apart to avoid component failure. The negative taper also provides better parallelism of the faces during operation, reducing the likelihood of grooving on the balance disc face due to contact.

An additional safeguard involves providing a Belleville-type spring between the bearing housing and the inboard thrust bearing shoes to open the balance device axial clearance during startup. When the pump comes up to pressure, the spring will compress and the balance device will achieve its normal operating position.

The large number of surfaces that need to be sealed to atmosphere and the significantly lower total mass of segmental ring pumps makes them much more susceptible to leakage and distortion than barrel pumps. External factors can affect the parallelism of the stage pieces and the even compression of the interstage seals, resulting in casing leakage. One of these factors is the tensioning of the tie bolts.

Hydro’s specialized capabilities for combined cycle plants are the result of 50 years of independent aftermarket pump experience. Rotor centralization, balance device redesign, and tie rod tensioning are just a few of the custom solutions that Hydro’s engineers have developed to improve the reliability of our combined cycle customers’ critical pumps.