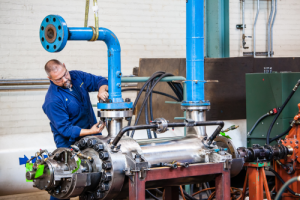 The two pumps are each about 15 ins in diameter and about 100 ins in length. They were shipped from the Western European site to Hydro, Inc.’s Chicago, IL facility to conduct analysis, redesign, manufacturing, and testing.

The customer had asked the original equipment manufacturer to help repair the two pumps because they were not meeting the hydraulic performance required at runout. However, the OEM was unable to resolve the issue of the NPSHr. It was needed on a critically tight emergency schedule.

The scope of work included the redesign and manufacturing of a new impeller, including the balancing, assembly, and performance testing with all necessary modifications during the process.

The first step was conducting an ‘as found’ performance test to determine how the pump was performing in its current condition. The data was collected and it confirmed the pump was not meeting the customer’s requirements.

After testing, the pumps were disassembled and an inspection was performed on all the individual components. A work plan was developed that included manufacturing a redesigned first stage impeller, and modifying the existing first-stage vane inlet configuration.

It was redesigned, casted, reverse engineering of the new casting, checked against the 3D model, machined, balanced, and then assembly of the rotor was performed. At that time, it was discovered that the rotor had runout in the middle. The machine faces in the original components were not machine concentric and parallel. Hydro needed to skim the impeller faces to trim them to a 0-.0001 runout. It then manufactured three to four split rings and machined them true with a 0-.0001 runout on the faces.

The rotor was then assembled again and tested to confirm that the runout issue had been resolved. It was then balanced to a 1W/n tolerance. The element was assembled and then retested. Testing confirmed that the newly designed impeller met the NPSH requirements.

The entire scope of work was performed on the two pumps during the critical time frame. Hydro is experienced with this type of pump and application. The customer was in a critical emergency situation and needed the scope of work completed within four months, rather than the usual seven months these types of modifications generally require.

Hydro was able to accomplish this so quickly because of multiple years of experience and in-depth design experience with this type of pump. There was a clear understanding of the design, superior expertise in the testing process, and in-depth knowledge of how the hydraulics of the pump works.

Hydro has experience solving similar issues for two nuclear plants in the United States that effectively met the requirements with the same type of pump in a similar circumstance. This allowed Hydro the ability to respond quickly to the emergency issue and deliver on time.

While Hydro had experience solving this issue, there were still challenges that existed. The original equipment manufacturer shipped the pumps to the Hydro facility in Chicago, where it was modified to meet the NPSHr needs. Hydro redesigned the first stage impeller and the suction stage.

In the process of receiving the pumps and inspecting them, Hydro discovered that one of them had 7000.007 excessive total indicated runout on one of the middle impellers. This is problematic with an eccentric design. The runout means there is a bend, and it is not running true. This creates an imbalance with the additional problem of the rotating pieces touching the stationary pieces. Hydro repaired this and reduced the runout to .001.

In the process of the repair, Hydro discovered that the pressure-reducing sleeve had micro cracks on the surface. This is a balancing component. Hydro solved this problem by manufacturing two new sleeves for both pumps to correct the balancing issue, which was caused by improper heat trading of the surface. Both pumps had the same problems, so the solution was duplicated, although some elements were happening simultaneously.

Another challenge was the rotor running out to an unacceptable tolerance. The rotor was disassembled with each component inspected. The major runout was occurring on the individual components that were supplied. To improve and reduce the runout, some of the components were machined and corrected by Hydro, but others had to be completely re-manufactured, for example, the new split rings.

The biggest challenge was creating the impeller design, modeling it, and manufacturing it in such a short time frame. More than half of the four months turnaround period was spent on this portion of the project.

In a non-emergency scenario, the entire scope of work would have taken almost twice as much time. Hydro used its PTLA certified testing facility to thoroughly test the pump to meet the requirements of the customer. The pumps were installed last fall and have been in operation for almost a year, running smoothly with no problems.

The problems that occurred with these 11-stage pumps are common and can be corrected if they are understood from the start. If everything is not machined true, parallel and perpendicular, these issues will be a constant and significant problem. Now that the modifications have been made, these pumps should last 12 to 14 years if operated properly. They should only require minimum and routine preventive maintenance.