Nuclear plants need to function effectively and have reliable systems. The equipment and manpower that keep the equipment functioning is crucial not only to the continued ability to provide power services, but to the safety of all of us. All nuclear power plants are required to maintain and regularly test their pumps to ensure operability in the case of a nuclear event or emergency. If they didn’t, the potential outcomes could range anywhere from the inability to produce electric energy to the occurrence of a catastrophic nuclear incident, potentially affecting many thousands of people. Simply put, nuclear power plants cannot afford to have malfunctioning equipment.

An auxiliary feedwater (AFW) system is one of the important features of a pressurized water reactor (PWR) nuclear power plant. This system serves two functions:

Both of these functions are crucial, and the pump must be at peak performance in either case.

A nuclear utility was experiencing repetitive maintenance and operational issues on its AFW pumps, reducing both system and unit availability. The issues included high thrust-bearing temperatures, black oil or oil discoloration and vibration amplitudes exceeding acceptable limits for operability. These pumps were Ingersoll-Rand Model HMTA, 10 Stage, Horizontal split case designs. The utility had worked over a period of several years to resolve the reliability issues with no success. 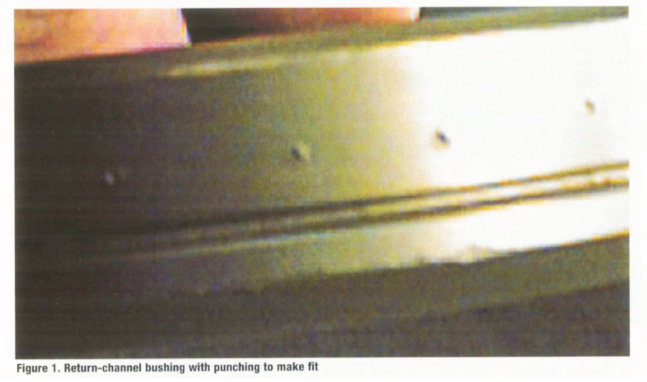 An inspection of the pumps revealed cracked/broken wear rings and broken/cracked diffuser inlet and exit vanes. In each of the pumps, it was determined that the diffuser vanes failed because of cyclic fatigue.

Due to the repetitive nature of these problems, the utility sought an evaluation by Dr. Elmer Makay, a well-known, independent pump expert. Dr. Makay encouraged his client to contract with HydroAire Incorporated, one of the oldest and largest independent pump refurbishment companies in the country, to deal with the situation.

A detailed design review, disassembly and inspection found numerous issues that could be the source of the problems. These included inadequate/improper impeller-to-diffuser hydraulic parameters and overlaps, poor rotor centralization and wear-ring material compatibility issues. A return-channel bushing with loose fit had been centered-punched 19 times to make it fit securely in its return channel (see Figure 1). While in service, the bushing became loose and released into the eye of the next stage impeller. 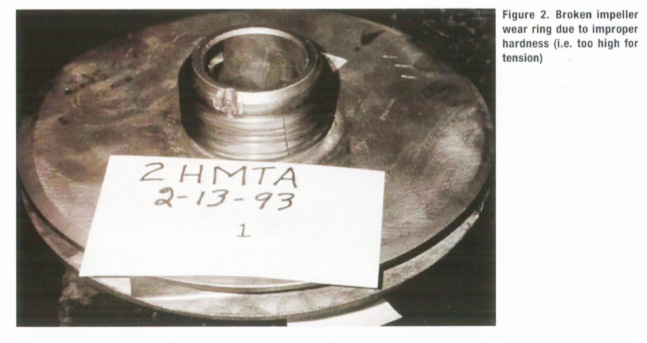 Although the root cause of the problems was primarily related to improper hydraulic design for low-flow operation, other contributing factors appeared to include inadequate assembly and installation procedures and poor quality control during manufacturing. These rotor and hydraulic instabilities and manufacturing and assembly deficiencies were judged to contribute in part or solely to the excessive thrust and vibration experienced during low-flow operations.

Quite a few corrective actions were necessary to resolve the problem. Gap A, Gap A Overlap and Gap B modifications helped eliminate: thrust-bearing over-heating or failure, part load instability due to dynamic radial and axial forces, thrust reversal problems, balancing disk/drum leak-off flow fluctuations, unstable balancing disk/drum performance. (Gap A is the radial distance between the outer diameter of the impeller sideplates and the inner diameter of the diffuser/volute channel sideplates. Gap A Overlap is the width of the impeller sideplates overlapping the opening of the diffuser. Gap B refers to the distance between the impeller vane exit and the diffuser vane inlet.) A design modification that introduced a “taper” in the load-carrying face of the balancing disk improved its axial thrust-carrying capability and provided maximum thrust-load protection during system disturbances. Precision machining and pump assembly practices were implemented to correct the problem of axial misalignment that existed between the pump impellers and diffusers. Other corrective actions included:

In addition, the installation practices were modified to ensure proper alignment of the pump impellers and diffusers, and the repair and installation of the AFW pump rotating assemblies was contracted to a qualified independent (non-OEM) engineering and pump repair facility.

As shown by before-and-after vibration readings in Figures 3 and 4, optimization of the A-Gap, B-Gap and impeller-to-diffuser overlap, combined with rotor centralization, material upgrades and precision balancing, finally resolved the performance issues that were being experienced by the utility. In fact, these modified AFW pumps have been performing efficiently and effectively for 12 years. This type of reliable performance, in turn, has allowed the utility to focus on other important issues in its operations.

By far, the most important benefit this nuclear plant realized by resolving its AFW pump issues was an increase in safety. Other major benefits, however, included: improved pump performance at high flows, stabilized pump performance with low flows, reduced repair and maintenance costs, enhanced technology of the AFW pumps and development of alternatives to the service provided by the pump manufacturer.

Benefits of the modifications described in this article are not limited to pumps in the nuclear industry. There are many instances where the same approach and modifications have been implemented to correct or solve similar problems in other applications, including decoking operations in steel mills and boiler feed pumps in fossil-power stations.

Pumps are rarely operated at the ideal flow conditions for maximum reliability, and they are rarely designed with adequate minimum flow protection. These two industry truisms require optimization of the pump hydraulic geometry and material combinations, precision repair and assembly practices and the use of knowledgeable personnel during pump installation. The final critical ingredient is a relentless attention to detail. To paraphrase a line from the biography of Admiral Hyman Rickover (founder of the U.S. Nuclear Navy program), “the devil is in the details, but so is salvation.”

Our economic future depends on cost-effective solutions and engineering expertise to resolve repetitive maintenance and operation issues for a wide range of industries. We can all benefit by improved knowledge, greater industry capabilities and a safer environment.

Will Gates was Principal Engineer with Southern Company Services.

George Harris is a founding partner of what has become the Hydro organization, and has served as President of Hydro Inc. since 1977. In that capacity, he has been closely involved in the growth of the company’s service centers, which focus on improving pump reliability and extending pump life by applying engineering upgrades and improvements. A graduate of the University of Illinois with a B.S. in Engineering, Harris has been associated with the pump industry throughout his career. Prior to helping found Hydro Inc. in 1969, he had worked with Fairbanks Morse for a number of years in the areas of application engineering and sales. For more information about the products and services listed in this article, email gharris@hydroinc.com