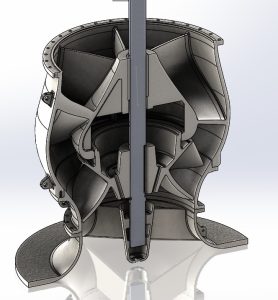 When the experts at Hydro were called on to reverse-engineer parts for a large circulating water pump in the Caribbean, they were concerned to discover an OEM-provided suction bell had failed during service. All internal ribs were lost and the bearing holder was found loose within the assembly. Not only had the suction bell failed, but the customer was facing excessive lead times for the parts needed for the refurbishment of the pump.

After a meticulous review of the suction bell design, it became clear that low manufacturing costs had been prioritized over reliability. Instead of providing the customer with a cast component, the OEM had provided a suction bell that had been fabricated, resulting in an excessively thin wall thickness. END_OF_DOCUMENT_TOKEN_TO_BE_REPLACED