A US fertilizer plant was experiencing recurring reliability problems with its horizontal multistage boiler feed pumps. The series of repeat failures motivated the owner plant to consult with a widely-known unbiased ­­­­aftermarket pump service provider. Previous experience with this company’s Texas facility gave the plant confidence that they had the capability to troubleshoot the problem and provide a solution. This type of supplier has been classified as a “CPRS”— Competent Pump Repair Shop, because their worldwide affiliates are staffed by specialists who have the fullest support of pump engineers at the company headquarters.

The aftermarket pump service provider performed a failure modes and effects analysis (FMEA) that took into consideration historical failure information and included an independent engineering analysis of the operating conditions. A review of the system history uncovered that the fertilizer plant had originally been designed with two 100% pumps. When the system was uprated, increased output requirements necessitated that both pumps operate in parallel to meet the new demand. Based on this information, the FMEA determined that the most probable failure mechanism was discharge recirculation caused by low flow operation.

END_OF_DOCUMENT_TOKEN_TO_BE_REPLACED 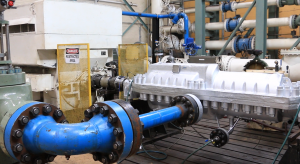 At a combined cycle power plant, a boiler feedwater pump was experiencing problems. Dr. Gary Dyson of Hydro, Inc. and Larry White of HydroTex discuss how major cost savings were provided through engineering analysis, material upgrades and testing for validation.

A combined cycle power plant in the Pan Handle region of Texas found themselves experiencing repeated failure on one of their 14 stage boiler feedwater (BB3) pumps. The pump had recently been modified by the supplier to provide a short-term solution. This in turn reduced the mean time between failure (MTBF) of the pump, requiring continued support and further analysis.

Combined cycle plants are comprised of both gas and steam power production technologies, capable of producing up to 50% more electricity than traditional simple-cycle plants. With the ever-increasing demand for energy, this technology is becoming increasingly relevant in throughout the pump industry. As such, it is highly important that these plants operate at peak efficiency.

Originally, the stationary inserts at several locations in the pump assembly were modified in such a way that increased the likelihood of friction and galling of the stationary and rotating parts of the pump assembly. The consecutive failures experienced on site were repeatedly of the same failure mode, which strongly points toward a pump design problem.