Hydro was called on to reverse engineer a large circulating water pump in the Caribbean to supply parts for refurbishment. The lead times for receiving parts from the original equipment manufacturer (OEM) were excessive. More concerning, the suction bell provided by the OEM had failed during service. All internal ribs were lost, and the bearing holder was found loose within the assembly.

When Hydro reviewed the design of the suction bell, it was clear that low manufacturing cost was prioritized over reliability. Instead of providing a cast component, the suction bell was fabricated and had an excessively thin wall thickness.

Hydro reverse engineered the suction bell and created a model for a cast component, establishing the rib design and bearing holder location based on design experience. Exterior ribs were added to strengthen the bell and the wall thickness at the suction bell skirt was increased from 3/8” to 2”. The part was scanned on-site within 1 day, with the engineering analysis, modified casting design, and quote for manufacture being
completed within about 3 weeks. 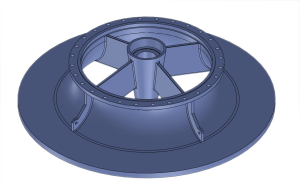