A major county in California found itself in a crisis when its irrigation pumps could not produce the required performance, cutting off critical water supply to the reservoirs and aqueducts. These pumps suffered from high vibration and repeated failures characterized by extreme wear to the propellers, shafts, and bearings.

The OEM had extended their abilities as far as they could but were unable to resolve the problems. Hydro’s engineering team was called on to provide a failure analysis and design an effective solution. Hydro found that deflection induced by high radial forces, excitation of the rotor critical speed at running speed, and faulty protection from sediment all contributed to the failures.

The solution provided by Hydro significantly increased the life of the pump. Not only were the changes effective, but they were executed efficiently. The modifications were completed in an expedited time frame, allowing the county to resume reliable water service to the agricultural industry that depends on it. 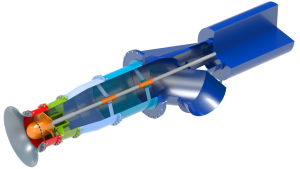