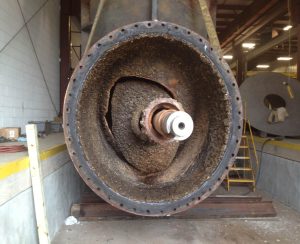 A critical vertical pump for a 750 MW unit was sent to Hydro South in mid-December 2012 for inspection and repair. The massive pump weighed more than 66,000 lbs. and was 32 feet long and 12 feet tall. When the pump was disassembled, Hydro South’s engineers discovered that a large 42” x 68” section of the discharge elbow was broken, allowing direct flow to bypass the turning section and flow directly into the stuffing box area.

The discharge elbow was made of casted cast iron and could not be welded. A replacement of this size would take around eight months to order and receive. 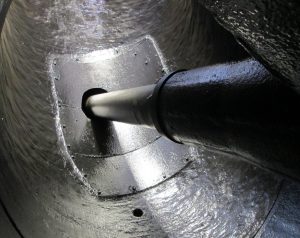 Hydro’s in-house engineering team worked with the customer to create a repair plan that could be completed in a 4-to-5-week time frame. The plan included manufacturing three steel plates to be inserted into the damaged area. Each plate would be .500 inches thick and was rolled and contoured to match the original contours of the elbow. The plates were installed and bolted to the damaged section of the elbow with each of the mating sections welded together. In addition, the backside was reinforced with gussets to effectively produce more than 155,000 gallons at 20 ft of head.

Following the installation of all the plates and gussets, the entire internal section of the elbow was coated to protect and improve the water flow. The pump was returned to the customer in early February 2013 and remains in operation today.