Hydro South recently completed the overhaul of a Condensate pump at its facility outside of Atlanta, GA. This pump is a vertical can-type, motor-driven centrifugal condensate pump installed at a nuclear power facility in the Southeastern US. The condensate system has three identical pumps that operate in parallel (with a maximum of two pumps normally in service and an installed spare).

The pumps are designed to operate continuously for the normal 18-month fuel cycle with no maintenance attention. Because the condensate system is critical to plant operation, it is imperative to verify the performance of the pump before getting it back in service. 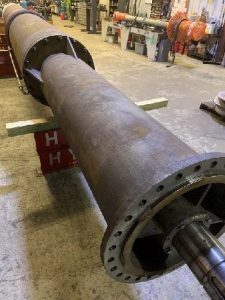 Hydro’s Performance Test Lab is equipped with state-of-the-art instruments for testing and has an extensive quality assurance program to support the nuclear industry. The Test Lab provided testing services for the Condensate bowl assembly with its in-house discharge head and motor. This method results in less set-up time and piping fabrication but still assures the integrity of the test.

The Test Lab’s Siemens Variable Frequency Drive allows testing to be performed at different speeds. A torque meter is used to ensure that the mechanical power and efficiency results are not compromised by the reduced speed test. In the case of the Condensate pump, motor limitations required testing at a lower speed; the results were corrected using the Affinity Laws.

The customer also took advantage of the Test Lab’s remote witness testing program. They were able to view and analyze raw data as recorded by the data acquisition system in real-time.  Hydro’s Test Lab staff were on-hand throughout the test to discuss the results and the plant was able to submit their approval virtually. This type of witness test can save a lot in travel costs, allow more plant personnel to witness the test, and accelerate pump delivery.

The performance test confirmed that the rated condition passed the 1B acceptance grade defined by the Hydraulic Institute. The efficiency results showed that the pump will operate close to the best efficiency point, which can reduce the energy cost and increase the time between overhauls. 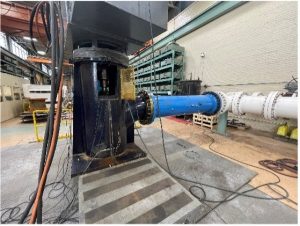 Furthermore, the pump is driven by a 4000 HP motor, so it’s critical that the mechanical HP doesn’t exceed this value over the full operating range from shut off to runout. The performance curve confirmed that the power required for the operating range remains below 4000 HP.  With extensive knowledge of repairing pumps and in-house testing capability, Hydro was able to provide a quick turnaround for the overhaul of a complicated vertical pump and verify that it meets the requirements for operating in the field.

Posted in Case Studies and tagged Hydro South, integrity of the test, large pumps, overhaul of a Condensate pump.