When the plant was shut down, the pumps and other equipment in the refinery were either left in place or went into storage where they were kept in poor condition. Time constraints prohibited proper preventative maintenance before the refinery shut down. The tropical climate is hot, salty, humid, oppressive, and several hurricanes occurred during this time. All of these extreme conditions can contribute to the deterioration of heavy rotating equipment. Over the course of the year, the temperature typically varies from 72°F to 88°F and is rarely below 68°F or above 90°F. 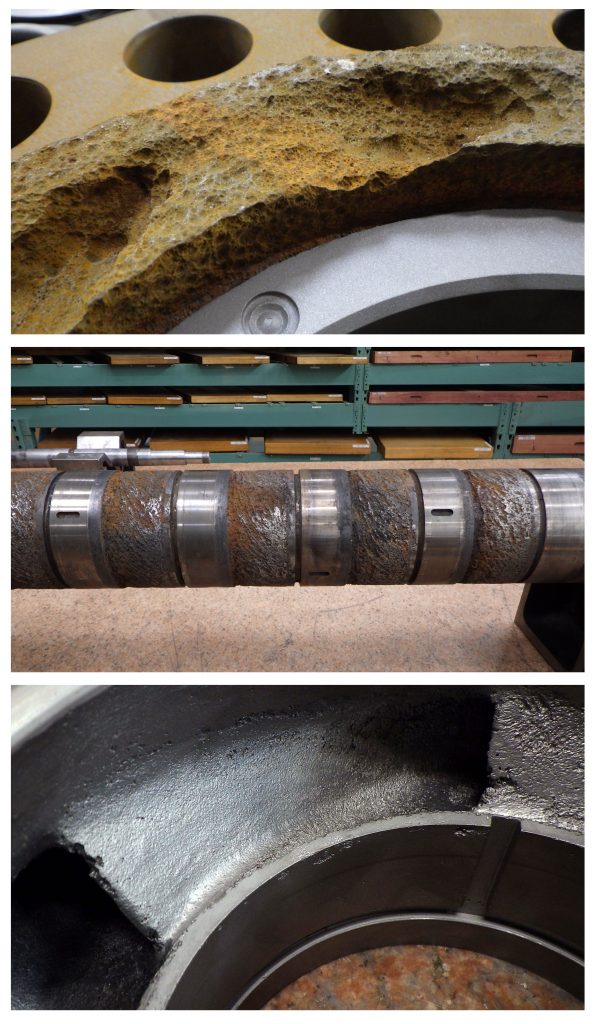 The pump is a high-energy barrel multi-stage pump that is used in a decoking operation. A delayed coker is a type of coker whose process consists of heating the residual oil feed to its thermal cracking temperature in a multi parallel pass furnace. This cracks the long-chain heavy carbon and hydrogen molecules of the residual oil into coker gas oil and pet coke. Cracking begins in the furnace, continues in the transfer line and finishes in the coke drum. The final product at the end of the process is coke.

The purpose of the decoking system is to provide a high pressure, high-velocity water jet to break up coke from the coker drum into pieces small enough to be washed out of the bottom manway of the drum. The jet pump provides high-pressure water flow to cut the coke out of the decoker drum.

When the new owners of the refinery decided to restart the plant, all the pumps needed to be examined. While hundreds of these pumps were sent to several of the pump service provider’s facilities throughout North America, the most critical project was the decoking jet pump. After taking it through the non-destructive evaluation, it was determined that everything could be saved except for the shaft.

For the decoker pump, coke fines and water mixed together to create a highly acidic layer on the element. The element itself was also very old and had already suffered significant wear and tear, including:

If they had placed the pump into installation, it would have failed immediately upon start-up (Figure 1).

The pump was delivered to Hydro’s facility in Chicago, where the nondestructive evaluation of the barrel discharge head and the rest of the components was performed. It was determined that the equipment was repairable.

A forensic analysis was also performed to understand why there was so much corrosion and erosion on the pump parts. The impellers and covers were reverse-engineered in order to evaluate them and make them to its original shape.

The following steps were taken to correct the issues:

The Direct Laser Deposition (DLD)/ Laser cladding processes have the ability to create superior surface properties on critical clearance parts, improving pump reliability and durability. The DLD welding process metallurgically bonds a metal powder to the base material. Due to a controlled and localized heat input, this process can be applied to various base metals without distortion or the need for post-weld heat treatment.

This process improves pump reliability, reduces the chance of galling and reduces the chance for cracking. It significantly increases mean time between repairs, improves the life of wear parts and maintains performance and efficiency. It restores worn pump components, repairs them to “as design” geometry, upgrades to superior surface characteristics and salvages used parts that would otherwise be scrapped (Figure 2). The corrosion was machined out of the barrel and then a ¼-inch thick layer of 309 stainless steel was inlayed.

The pump performance test consisted of operating the pump from its maximum flow capacity, to its best efficiency points, to its rated operating condition, all the way to its minimum flow rate with several additional test points in-between. During the performance test, flow capacity is measured along with differential head and pump input power. With these two pump performance characteristics determined, the pump efficiency can be calculated and determined for each test point.

The equipment remains in its hot, salty, humid environment, but the rebuilt equipment with proper maintenance could run smoothly for another six or eight years.

The biggest problem with this kind of pump is the process it is in. As the coke is blasted out of the drum, the water recycles back into the pump. Coke fines can be abrasive and have a tendency to worn out the pump badly, causing a lot of abrasion on the rings and on anything that’s rotating.

Rather than replacing the pump, it was able to be refurbished for just over half the cost and in considerably less time. Over 200 pumps were also refurbished by Hydro and have been shipped back to the customer; all with different levels of damage.

The solution ensured that the refinery did not have to extend the shutdown of its facilities or delay the reopening procedures due to not having the critical pump on hand. Further, the metallurgical upgrades and modifications mean that the equipment won’t have to see the same degree of damage as they did before.