Hydro Middle East, specialists in pump rebuilding, particularly in the oil and gas industry and other industrial markets was called in to assess the damage and redesign and rebuild the fire-damaged pumps. Hydro’s engineers first evaluate the causes of any pump damage or failure and then provide expert engineering analysis and a responsive field service. 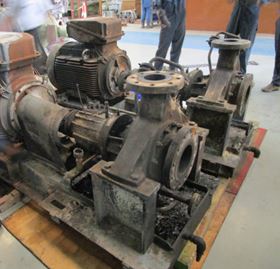 In the case of the fire-damaged pumps, once the fire was under control, Hydro immediately sent a field engineer to the site to conduct a root cause analysis and make recommendations to ensure that the equipment would be restored within the very fast turnaround that the company required.

The engineers discovered that the fire had been so severe it had completely burned out all of the oil in the bearing housing. In addition, the baseplate was also warped because of the excessive heat. A turnaround of between two and three weeks for redesign and rebuild was proposed, subject to mechanical seal availability and the two hot oil circulating pumps, along with the baseplate and the motors were shipped to Hydro Middle East’s facility in Dubai, U.A.E.

A complete inspection of the damaged pump and further root cause analysis revealed the possible cause of the fire could have been from the misalignment of the pump shaft to the motor shaft, which had apparently caused excessive vibration. When the axial movement increased and oscillated the shaft, the labyrinth seal broke. However, the pump did not shut down. This caused the containment of the mechanical seal to fail. The leaking seal fuelled the heat, creating excessive friction and starting the fire.

Once they knew what had happened, Hydro Middle East’s engineering department came up with a plan to redesign the pumps. The redesign included a newly upgraded shaft design and an upgraded power end, both of which needed to be manufactured within the already tight time frame. The badly deformed baseplate also needed a complete redesign and rebuild. The new designs were quickly and carefully drawn and approved.

The biggest challenge for Hydro Middle East was to complete the redesign and rebuild of the entire baseplate, pump power end and shaft within two weeks for the first pump. This timeline also included full assembly, paint, and dispatch back to the site. Hydro Middle East worked closely with Hydro Houston to complete the work on the bearing housing. All other parts were manufactured at Hydro’s manufacturing centre in Dubai.

The parts were measured and scanned using 3D co-ordinate measuring equipment, which is a device that measures the physical geometrical characteristics of an object. The machine is sometimes manually controlled by an operator and sometimes computer controlled. Three-dimensional measurements are defined by a probe attached to the third moving axis of this machine. Probes can be mechanical, optical, laser, white light, or other types.

Using this 3D co-ordinate measuring technology, manufacturing drawings were made overnight for the pump parts. The sturdier, upgraded baseplate was designed using Hydro’s solid modeling program, which combines mathematical and computer modelling of three-dimensional solids to produce computer-aided designs. The drawings were transferred to production with 48 hours.

Hydro’s CNC machines produced all the pump parts, while the baseplate was manufactured in Hydro Middle East’s in-house welding and fabrication unit, which has the capability to perform tig,mig, plasma, stick, sub-arc and submerged metal arc welding. The in-house furnace was used for the stress relieving part of the operation.

These technical innovations contributed to the high-quality emergency turnaround, along with Hydro’s 24/7 workshop capabilities. Hydro kept the customer informed of all progress on a daily basis, which allowed the customer to prepare for the timing of the pump installation.

When everything was ready, the Hydro field engineer was onsite to install and commission the newly redesigned and the rebuilt hot oil circulating pumps. The customer was very happy with Hydro Middle East’s work and praised the high quality work and exceptional craftsmanship, especially as Hydro is not an original equipment manufacturer.

Hydro Middle East has successfully completed the upgrade in pump design along with improvements to the cooling fan design, a larger bearing housing, better sealing of the housing, a sturdier shaft design, and an enhanced baseplate design. The pumps were up and running once more within an unprecedented fast turnaround.