A comprehensive approach to reverse engineering helped to establish the differences between the stainless steel and original bronze impellers. 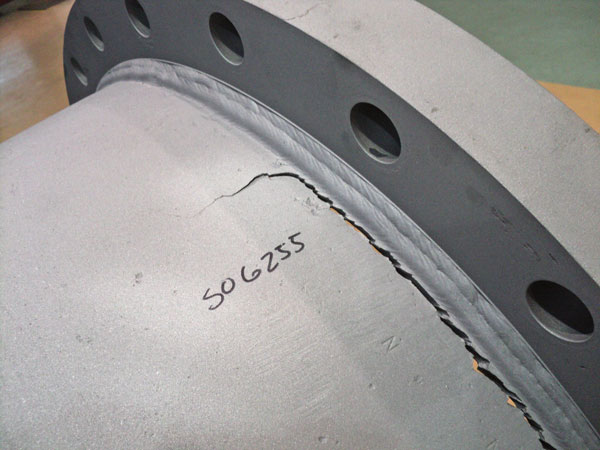 Image 1. A crack in the discharge head flange that involved fatigue failure of the weld of a pump. 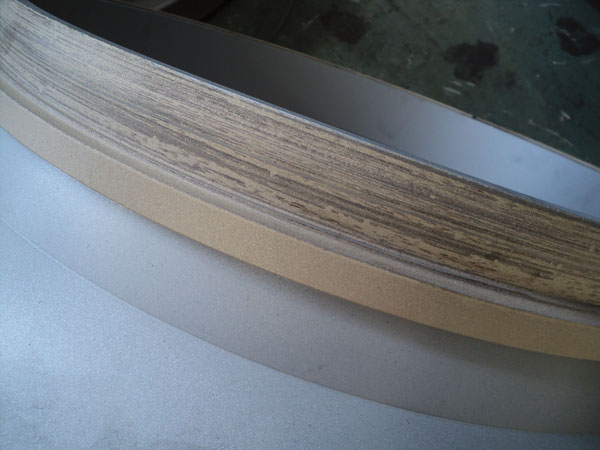 The equipment in question consisted of three-stage vertical turbine pumps running either in standalone or in parallel operation as required. The failure manifested itself through high vibration and caused severe scoring of the pump shaft and wear ring landings, leading to fatigue failure of the weld on the discharge head flange (see Images 1 and 2). The commissioned pump was refurbished and rebuilt by another company’s service center with spare impellers supplied by an original equipment manufacturer. No changes to the geometry had reportedly been made, although the impeller material had been upgraded from bronze to stainless steel.

The plant initiated its internal root-cause analysis process, and the failed pump required emergency repair. The station sought a company to conduct the repair, and the firm reviewed the customer-supplied documents and background providing the possible causes of the failure.

The line-shaft bearings and remanufactured bowl assembly were analyzed for mechanical and assembly root causes. The weld repairs were analyzed, and samples were sent to metallurgical laboratories for review by the end user. There were no apparent mechanical problems identified to point to the root cause of the failure. 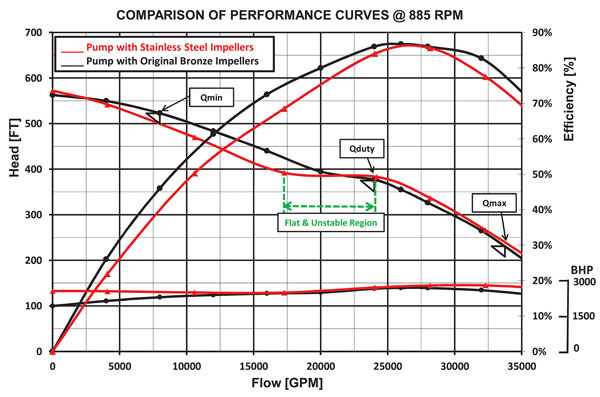 Figure 1. The chart shows the comparison of performance curves of a pump using stainless steel impellers and original bronze impellers. (Images and graphics courtesy of Hydro)

A thorough investigation of the machine’s performance was conducted, and a detailed comparison between the stainless steel and bronze impellers showed considerable differences in the shape of the head and flow (H-Q) curve (see Figure 1).

From the analysis of the pump curves, engineers saw that the shape of the pump curve differed significantly from the original, suggesting a discrepancy in geometry. The newly supplied stainless steel impellers represented a relatively higher specific speed.

The pump with the stainless steel impeller also consumed more brake horsepower at the required maximum flow (Qmax). With this observation, engineers determined the unstable operation at the duty flow could have been the cause of the pump failure. This shows the importance of analyzing the impeller geometry and providing pump tests to ensure proper pump operations. The next step involved studying the difference in geometries of the bronze and stainless steel impellers. 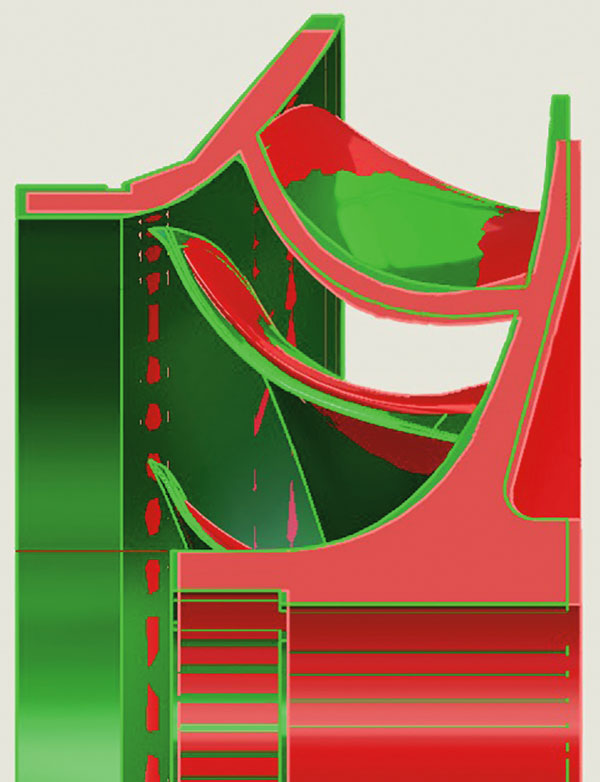 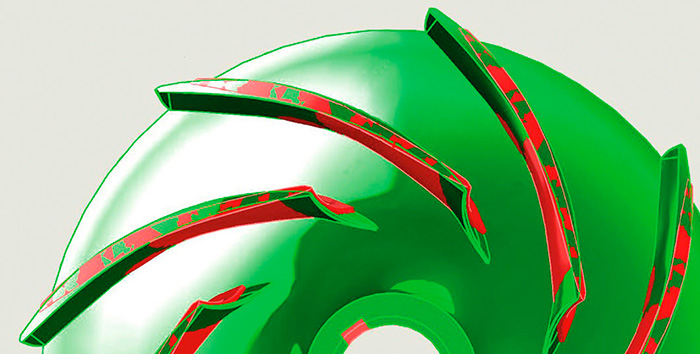 Figures 2 and 3. Reverse engineering shows differences between the stainless steel impeller, in red, and the bronze impeller, in green.

Geometry Comparison
Using a comprehensive approach to impeller reverse engineering, experts established the differences between the stainless steel and the original bronze impellers. Significant differences in the vane shape and at the vane exit and inlet (at the impeller eye) raised concerns about the impeller geometry (see Figures 2 and 3).

The discharge vanes at the impeller outlet were considerably different, causing the discrepancy in head and curve shape.

With this input, the plant reviewed the submergence data and confirmed the actual submergence level was at the minimum at the time of the pump failure. The minimum level for bronze impellers might not be sufficient for the stainless steel impellers, which could have compounded the problems of unstable operation and high vibrations.

Instead of repairing the cracks on the discharge head flange by welding, engineers suggested a spool piece design, manufactured and mounted onto the discharge head (see Image 3). The stiffening ribs added to the spool provided extra strength. 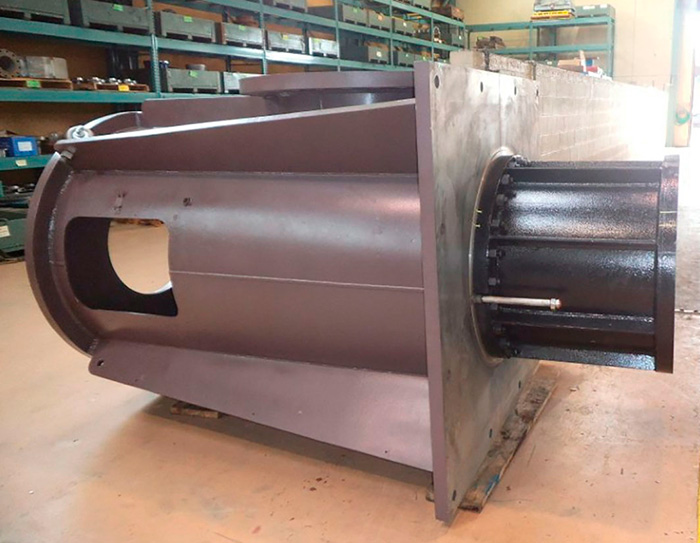 The end user decided against the stainless steel impellers and reverted to the original design with bronze impellers. In order to conclusively identify the root cause of the pump failures, a comprehensive pump performance test was required.

To gain more insight into the unstable operation at any given flow, the engineers decided to take multiple flow data points from shutoff to Qmax (and also closer intervals in the order of 1,000 gallons per minute near the potential unstable range of flow), the standard vibration on the discharge head, and additional vibration on the bowl in submerged condition.

After extensive analysis and performance testing, engineers identified the failure mechanism. The geometry of the impeller had a significant impact on the shape of the performance curve. Poor geometry control through the material change process caused large deviations from the original geometry that led to a serious failure.

The manufacturing process must always be considered along with the design process when making changes to all aspects of the design, and robust checks should be in place to ensure site performance is not compromised. Performance testing of any upgrade is always valuable even when the upgrade is not hydraulic. Performance testing ensures that any pump can achieve its required H-Q curve shape, achieve acceptable vibration levels and perform correctly when installed.