Written by: Gary Dyson (Hydro, Inc.)
Publisher: Pumps & Systems / August 2014
A multistage BB5 diffuser machine in oil transfer service in the Middle East had been in operation for many years without problems. After a routine maintenance strip down and rebuild, the pump experienced a high thrust bearing temperature of 105 C, which caused it to alarm and shut down. The temperature range had previously been 75 C to 85 C.

This case study describes the method used to solve the high bearing temperature problem and outlines the flow physics that contributed to the high thrust bearing temperature. The customer contacted an engineering services company after the original pump manufacturer failed to remedy the problem.

The engineering services company identified several scenarios that could cause this temperature rise, then narrowed down the list to establish a root cause.

The behavior of thrust bearing pads during startup is seldom investigated. The temperature rise of the pads can be attributed to two distinct causes—thrust developed during startup and environmental and oil conditions (see Figure 1).

Figure 1. Behavior of thrust bearing pads based on thrust and environmental conditions (Article images and graphics courtesy of Hydro Inc.)

The significant finding from this data was the temperature rise associated with thrust. The pump could not achieve the temperatures measured prior to maintenance in its current condition. The total thrust bearing temperature includes the oil temperature and environmental conditions.

Based on comparisons with previous site data, both the thrust and oil cooling had altered. Analysis of the temperature data at the motor bearings, which were experiencing oil temperature increases of 10 to 15 C, further supported the conclusion.

Analysis of the pump build procedures also revealed that a change in thrust quantity was causing a high pad temperature. This machine can be susceptible to thrust changes due to the axial position of the impeller with respect to the diffuser.

The engineering services company investigated the build process and discovered that the original bearing housing had not been used in the rebuild. The axial position of the rotors had not been reset correctly, unlike the bearing clearance.

This machine has an adjustment ring behind the thrust collar that is used to account for build tolerances in the components stack. Fitting the new bearing assembly affected the rotor positioning. The adjustment ring had been refitted without ensuring that the rotor centralization had been carried out correctly.

The direction of the thrust further complicated the scenario. Thrust bearings on this machine are designed to run with the thrust on the inboard pads. When a pump runs back to a lower flow, a thrust reversal affects the outer pads.

Although this pump was not running at its best efficiency point, its operating flow was not reduced enough to cause a thrust reversal. Scrutiny of site data indicated that this pump had always thrust to the outboard pads regardless of any process changes over time.

Some pump manufacturers fine-tune the thrust behavior of their machines by adjusting the size of the balance drum and bush based on their initial performance test results. If this process is too time-consuming, manufacturers adjust the axial position of the rotor with respect to the diffuser to modify the thrust and bearing temperature.

This rotor setting data is easily overlooked on rebuild, especially since the actual rotor centralization is rarely checked on strip-down. This means it cannot be restored after a component change.

As a pump operates at partial capacity, the flow becomes increasingly unstable. Both the impeller and rotor experience an increase in unsteady flow interchange.

Traditionally, this flow regime interaction has been illustrated as in Figure 2 in the meridional plane. Although this image is helpful in understanding the flow physics, the true picture is far more complex. 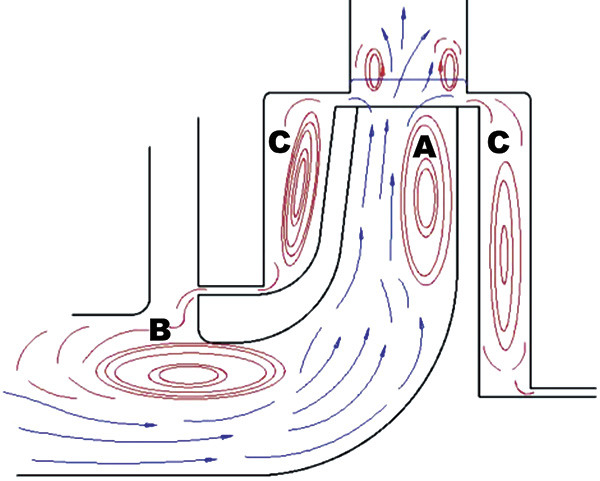 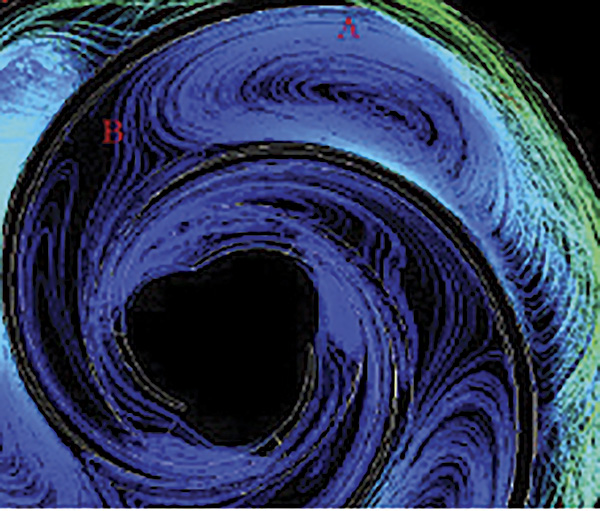 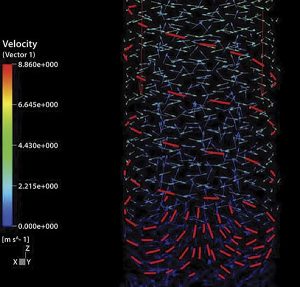 At partial capacity, the flow exits the impeller eye at the hub inlet angle and spirals down the suction channel impinging on splitters of the previous stage.

The meridional view clearly depicts these two unstable flow interactions with the vortex that exists within the gap between the channel ring and impeller shroud (see Point C in Figure 2).

This vortex accounts for the developed thrust within this pocket. Any disruption to this vortex leads to a more unpredictable thrust regime.

The centralization effect of the rotor within this channel influences both the development and speed of this vortex. The space available for the vortex is either increased or decreased so boundary layer effects begin to dominate.

The solution to the high thrust bearing temperature problem lay in a combination of contributing factors, each needing in-depth understanding of pump technology and flow physics.

The following actions returned the pump to an acceptable temperature: 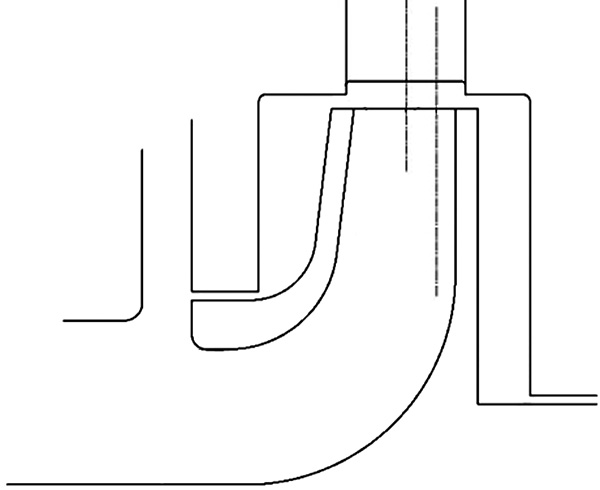 This case study illustrates the problems that can arise if a meticulous approach is not adopted for even a routine maintenance activity. Severe operational problems can be prevented by repair practices that diligently record every aspect of the pump repair.