Station History
Eraring Power Station, located in the coal belt area at Lake Macquarie on the central coast of New South Wales, began generating in 1982, with all four units commissioned between 1982 and 1984. Formerly state owned under the banner of Eraring Energy until mid 2013, the station is now owned by Origin Energy, one of Australia’s largest electricity generators and retailers.

The power station underwent a significant upgrade during 2010 to 2012, increasing the output of all four generating units from 660MW to 720MW each. Eraring is the largest generating unit in the Origin group and has established itself as Australia’s largest power station since the upgrade.

Condensate Extraction Pumps
The pumps are the standard arrangement of condensate extraction pump used in the power generation industry: underfloor, vertically mounted, canned design, 4 stages with a double suction impeller and inline suction and discharge ports. Each of the four generating units has two 100% duty pumps, driven by a 1850kW 4 pole, electric motor.

Problems
For more than a few years, the life of the thrust bearing has been subjected to scrutiny after causing numerous premature failures and constant concern for the Station Operators, Maintenance Engineers and Management. The thrust bearing design was typical for the period that the pumps were manufactured, tapered back to back roller design incorporating both thrust and radial loads and the drive coupling configuration as part of the bearing cartridge.

Station Engineers had been researching the upgrade design options for a period of time, calling on the original equipment manufacturer, aftermarket service centres and bearing manufacturers for input and options to overcome this troublesome plant and work towards the best possible solution.

Contract Overview
In 2012, Eraring Energy released a tender for the upgrade project to several service providers. The project included a sizeable work scope including design and supply of a new white metal bearing cartridge with an appropriate pedestal and several other new components.

The contract specifications require maintaining the same pump drive couplings, electric motor, mechanical seal cartridge and as many of the original pump components, meaning there was substantial engineering work required by the Hydro Australia Engineers.

Contract Award
A contract of this size was sought after by several original equipment manufacturers and Hydro Australia Pty. Ltd. located in the Gippsland region at Morwell Victoria was awarded the contract late in 2012. The contract runs for a period of 4 years with the first pump installation completed in April 2013 and the final pump due for installation in 2016.

Additional Requirements & Spare Pump
With the knowledge and experience of Hydro Australia with the supply of engineered spare parts, a major undertaking was to supply and a complete new discharge head, a first for Hydro Australia. The 2.5 m high and 1.7 m wide discharge head is the most significant component of the pump as it ties everything together. Other new components were manufactured by Hydro Australia including impellers, stage cases, wear rings, couplings and shafts. The new components complete with the stations spare parts, enabled a complete spare pump to be manufactured. This spare pump gives flexibility and relieves time critical exchanges and on the run maintenance. 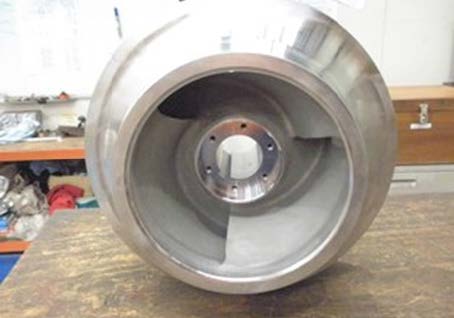 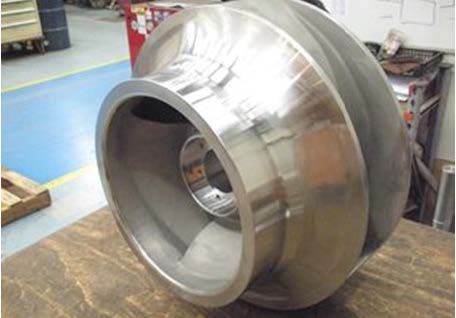 Two angles of the 1st Stage Impeller Manufactured by Hydro

Long Term Relationship
Hydro Australia had a long relationship with the Eraring Power Station having refurbished several condensate extraction pump hydraulic wet ends and several main boiler feed pump cartridges over the previous five years. All the Hydro repair methods, procedures, inspection parameters, reporting formats and attention to detail that the Eraring Engineers have become accustomed to in the previous Hydro Australia refurbishment work will be used to the utmost detail in this contract.

New Design Bearings
Hydro Australia worked closely with Michell Bearings in the UK during the tender process and settled on a water-cooled AV series bearing design from their standard range with a few additional customised inclusions to suit. The bearing cartridge includes all the instrumentation typical on new plant including RTD’s imbedded in the thrust and journal bearings, oil temperature sensors in the oil chamber, oil level alarms and trips, cooling water temperature sensors and a proximity probe located adjacent to the bearing cartridge. 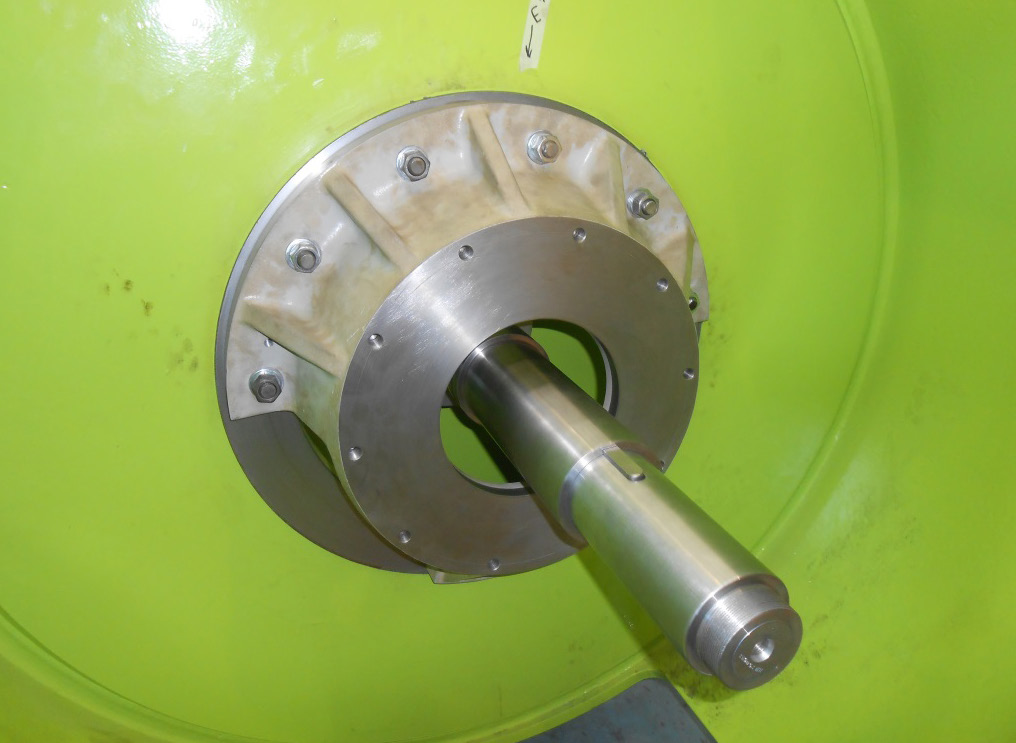 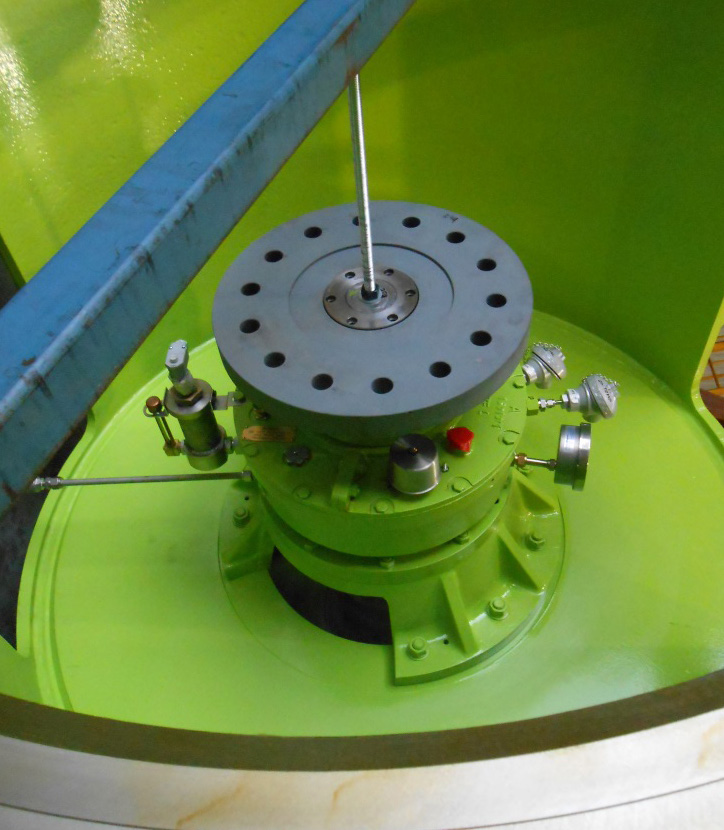 Installation Issues
With the power station design, difficult location of the pumps plus the size & weight of the pumps, removal and installation was a long procedure requiring the pumps to be partly dismantled in-situ. The pumps (without motors) are approaching seven metres long and weighing 4,500kgs. Removal and reinstallation is a lengthy process which requires removing the motor, splitting the pump in two parts, removing the discharge head first, then the wet end.

Installation Solutions
Hydro Australia’s Engineers came up with several designs to make life easier, quicker and safer. The first modification was to cut the shaft in two pieces making the handling of the hydraulic wet ends easier and to reduce the possibility of damaging the costly shaft when handling and transporting, this requires the use of a Hydro designed sleeve style muff coupling.

Installation Solutions
Installing the pump in two pieces, setting the end float, setting up the bearing, mechanical seal and drive coupling all in a difficult location can be a cause of error and concern. The site of the installation is difficult because the the pumps are several levels below the crane that lifts the pump through an opening in the floor. Hydro Australia Engineers, working with the Site Contractors PPI and the Station Engineers devised a way of installing the fully assembled pump in one piece thus enabling the entire pump to be built, setup and ready to go in the Hydro workshop. Only the motor is fitted in-situ now. The method saves over a week of disassembly, assembly and set up time on site on each pump change. 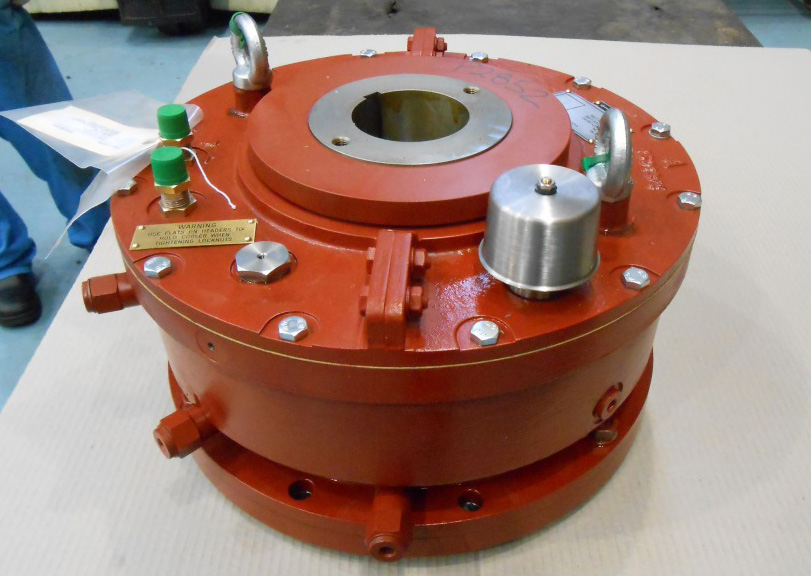 New Bearing Set Up for Installation

Hydro Attention To Detail
Another Hydro solution was manufacturing a testing jig to check the concentricity and parallelism of the 2.5 metre tall discharge heads. After 30 years in operation, a concern was that some of the discharge heads may be found to have become distorted. Since inception, Hydro Australia has pushed the need on multistage pumps for concentricity and parallelism of all components to ensure the entire pump rebuild is set up perfectly. This custom built testing jig saves a significant period of time on every rebuild and can be used time and time again long after the contract is finished.

Successful Operation
The first pump completed on the contract was built up with site spares and some of the newly supplied components manufactured by Hydro Australia. The pump was successfully upgraded and installed during an outage in April / May 2013. Following pumps have been installed in September 2013 and April 2014, all three on time and operating as well as anticipated with low vibration levels measuring around 50 to 70 micron on all the pumps, a very pleasing result to all concerned.

Working Partnership
The trust and open communication between the Eraring Power Station and Hydro Australia all as we worked together as a partnership working toward a common goal have been extremely beneficial to the project. A long standing relationship has been further built on by this contract and hopefully far into the future.

Lessons Learned
Pump design, materials, components and specifications have come a long way in the past 30 years. Initial instinct when a piece of equipment has failed is to replace like for like. With the advances in technology and the experience of Hydro Australia being one of the most experienced non OEM pump rebuild companies worldwide, there are always options to improve, upgrade, build to a better standard and prolong the life of existing pump equipment. Hydro has proved this sentiment time and time all around the world.