Hydro is a global leader in the pump aftermarket repairs, upgrades and engineering solutions.

Pump companies typically fall into one of two categories: the original equipment manufacturer (OEM) that design, build, and sell pumps; and smaller, local machine repair shops. But Hydro offers the pump industry the best of both worlds. George Harris, one of the original founding engineers and current CEO, explains Hydro’s unique worldwide market position: “We have developed a unique niche where we have the engineering services, the testing capabilities, and the worldwide footprint that the large OEMs have, but we still maintain the exibility and the cost-effectiveness of the smaller companies.”

Harris also emphasizes that engineers are the heart of the company. Nick Dagres, the Vice President of Nuclear Operations in Chicago, notes that “We focus on aftermarket services and support. We implement engineering modifications to improve the performance of pumps that are out in the field.” By offering pump rebuilding, engineering, and upgrading at each service centre, Hydro can more effectively service the special needs and requirements of customers in each region. Staying close to the customer is one of the fundamental tenets of Hydro’s strategy and culture. 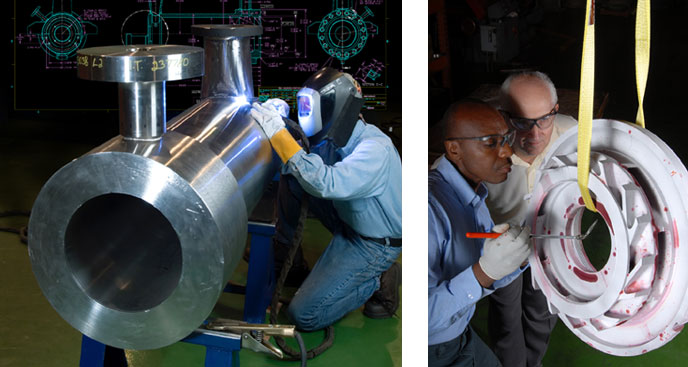 (Left) Hydro’s long list of services include welding-related repairs, such as performed on this 2 ½” Pacific RL IJ charging pump. (Right) A thorough quality inspection is carried out by Hydro’s detail oriented engineers.

Harris explains, “Our plan is to continue to grow and to develop centres across the globe.” And because of Hydro’s simple corporate structure, each service centre can respond more effectively to local market needs. Ross Bertoli, the General Manager for Australia and Southeast Asia, reflects on the history of Hydro’s worldwide reach. Australia was the location of the company’s first operation outside of North America. It began when Bertoli, working for another company at the time, discovered that a large power generating company in the Australian state of Victoria was sending their pumps to a company in the U.S. for repair. After some investigation, Bertoli discovered that the company was Hydro. “I went to Chicago and met George and all the Hydro people and convinced them to set up an operation here in Australia,” explains Bertoli. In 1996, the first operation was set up in Australia and nearly 20 years later, Hydro has locations in Canada, the U.K., France, Dubai, India, Malaysia, Vietnam, and Korea, as well as nine service centres in the U.S.

Tom Pendlebury, Director of Operations at Hydro Middle East in Dubai, adds that Hydro’s worldwide network adds to their success. Service centres share their knowledge, experience, and resources to provide solutions and troubleshoot complex problems. “By locating in Dubai, Hydro has effectively placed itself in the hub of the oil and gas industry. While areas such as Saudi Arabia and Iraq have larger oil reserves and production rates, Dubai has become the purchasing centre for the major oil and service companies. The key to operating in this region is locality; the industries demand that service work is carried out in close proximity to their operations as response time is critical.” The oil and gas industries, for example, have 30% of the world’s oil production within a one-hour flight of Dubai. “Many businesses start with the aim of becoming a substitute for the customer’s already established supplier base. Thanks to an experienced team of engineers, a highly-skilled workforce and access to some of the most advanced technology in repair and manufacturing available at Hydro’s worldwide locations, we have been successful in becoming the number one choice for a number of high-profile customers. Rather than trying to be a substitute, Hydro is intent on offering advanced engineering coupled with a rapid and personalized response,” says Thomas Arakal, Director of Sales and Marketing at Hydro Middle East.

A culture of continuous improvement and innovation

Dagres describes how an independent company like Hydro is set apart by its in-house testing lab. “What it gives us is the ability to be responsive to our customers. Not only can Hydro develop and execute pump modifications and upgrades, but now they can prove performance improvements at the Chicago test lab facility which has 5000 HP and flows up to 26000 gpm for horizontal testing, 2000 HP for the vertical machines and up to 42000 gpm, a variable frequency drive from 2300 to 4160 volts and submersible pump testing capacities of four to14 inch discharge vessel sizes. Hydro’s testing lab procedures are so thorough that OEMs have called Hydro to do their testing. “They don’t have the resources or they don’t have the capability to do it,” explains Dagres. Hydro has also performed special air void fraction testing for the nuclear industry which was monitored by the Nuclear Regulatory Commission of the United States government.

Hydro’s tailor-made reverse engineering processes support customers on difficult-to-source engineered parts and, in particular, cast parts. “We have spent much time and effort in developing a unique process.” Explains Werner Bernard, the Nuclear Parts Manager in Chicago. Bernard explains a recent case study success: “We reverse-engineered and manufactured a 500-lb aluminium bronze bowl for a vertical pump in a short lead time of six weeks. We had to completely reverse engineer and redesign the bowl because the original part was damaged and worn. We were able to deliver a brand new casting that was tested in our test lab and conformed to original performance.”

Gary Dyson, who is responsible for running Hydro’s engineering services in the U.K. Advanced Engineering Centre, explains how each location follows Hydro’s exacting standards and processes so each customer experiences Hydro’s quality services. Dyson also notes that while the focus in the European market is very much directed to energy efficiency, it is not an isolated movement. “I think it’s a worldwide trend to focus on power reduction and reliability improvements. We see this need across the energy, oil and gas, and power sectors.”

The energy trend is something Bertoli feels Hydro Inc. got a head start on in Australia. “When the carbon tax was announced about three years ago, we could see its effects immediately. People were looking for ways to reduce their output and the carbon they were producing. We altered our approach and instead of just repairing and refurbishing their pumps, we are now focusing on improving the efficiency and performance while at the same time reducing their energy costs.” For example, Hydro recently upgraded boiler feed pumps for a customer in Victoria. By improving the efficiency of the pump, energy savings of AUD $95,000 a year were achieved. There is no doubt that their global presence gives
Hydro an edge on emerging industry trends.

“We have a unique place in the market,” says Barnard. “We get to look at all the various designs that are out there and analyze them, pick the best design and then implement the ones that we think work. That is pretty unique to find an engineering orientated company where we really do focus on the engineering.” As unbiased participants, Hydro has a unique position in the worldwide pump industry. Bertoli emphasizes that the company continues to grow, pointing to a joint venture with a Malaysian company that involves building a new facility that will be opened in twelve months. There is a Vietnam operation as well that Bertoli works on from his Australia location. Harris notes that “The services we provide – the pump rebuilding, the engineering, the pump upgrading – all of these capabilities are really required at each location’s geographic area. I think it’s very important to share our message because I believe there are many companies that can benefit from the unbiased engineering and pump services that we offer.”