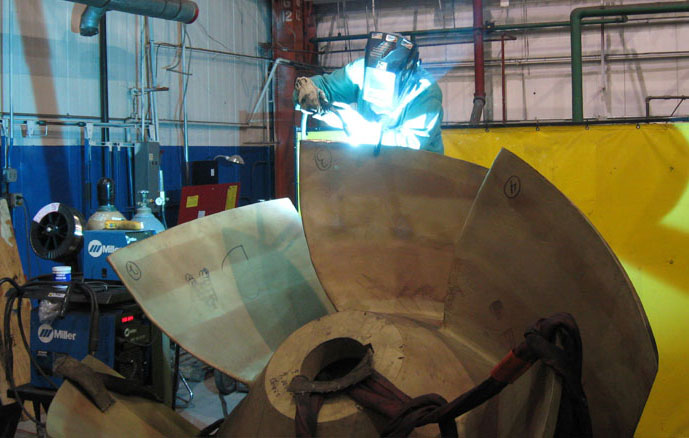 During the 2012 refueling and maintenance outage at Unit 1 of the two-unit Calvert Cliffs nuclear power plant, near Lusby, Md., Hydro East, a subsidiary of Hydro Inc. based in Aston, Pa., supported the on-site overhaul of two large circulating water pumps. Used to supply cooling water to the plant, the Foster Wheeler vertical pumps are 8 ft 3 in. in diameter, 11 ft 5 in. tall, and weigh approximately 25,000 lb.

After the 2012 refueling outage was completed, Calvert Cliffs engineers and Hydro East’s field service team convened to discuss the project, review lessons learned, and generate plans for making the 2013 refueling outage at Unit 2 even more efficient and cost-effective. In preparation, the two groups reviewed the process that had been used in 2012 to remove, rebuild, and reinstall the Unit 1 circulating water pumps, which had been rebuilt on-site. Hydro East’s field service technicians reconditioned the impellers on location, and the Fort Smallwood Fabrication Shop gathered the other parts required to complete the rotating assemblies. The complete disassembly of an entire pump took four 12-hour
shifts, requiring one shift to clean all the reusable parts and another shift to flip and stage the parts. Each shift required a significant number of site resources as well—including security, a crane, and the crane operator—and because other tasks being performed during the outage required the use of some of these same resources, the field service technicians experienced substantial downtime.

To eliminate downtime caused by plant-induced delays—such as having to wait for the crane to become available or for spare parts to be machined—Calvert Cliffs decided to remove the Unit 2 circulating water pump rotating assemblies in one piece and send them to the Hydro East service center to be rebuilt. This plan enabled Calvert Cliffs to achieve cost savings by maximizing the availability of its internal resources and by reducing the number of shifts needed to remove
the pump assemblies from four 12-hour shifts to two. More important, lifting the assemblies in one piece eliminated two high-risk rigging activities for each pump.

Because the revised plan specified that the rotors would be removed and installed as complete assemblies rather than individual components, the engineers at Hydro East designed special shipping fixtures to support the assemblies during transport. After the conceptual design for the fixtures was submitted to Calvert Cliffs and was approved, three were fabricated at the Hydro East service center. These fixtures proved to be essential for keeping the pumps stable during transport. 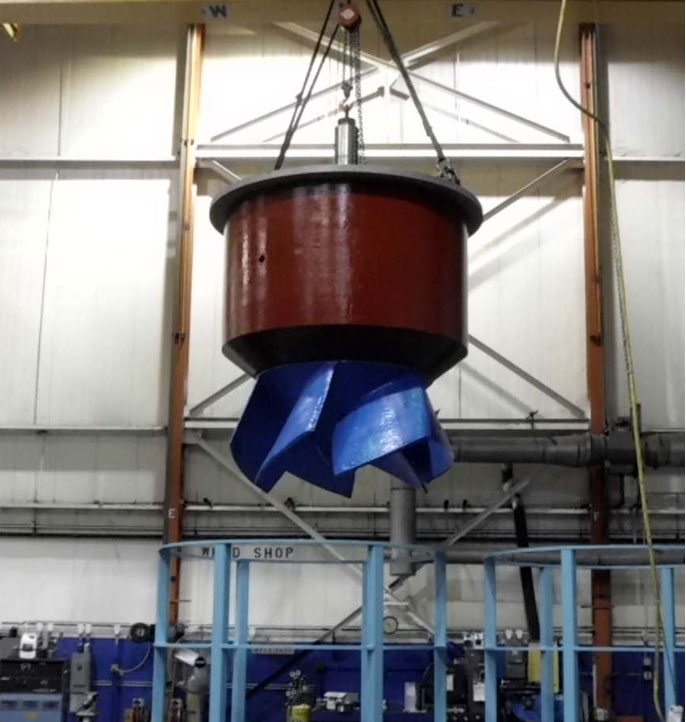 A 50-ton overhead crane at the Hydro East service center lowers a vertical pump assembly into the specially designed fixture.

It is critical to have the proper in-transit supports when delivering a rebuilt vertical pump back into service. The goal is to maintain the alignment of the vertical pump during transport. Typically, the pumps are transported to a job site on flatbed trailers, secured with heavy chains that can bend or otherwise negatively affect the newly rebuilt pump. With the specially fabricated fixtures, Hydro East’s field service team was able to achieve precision alignment when it came time to install the vertical pumps back into service at Calvert Cliffs.

To ensure that the assemblies could be transported in a vertical position, Hydro East’s field service team researched travel routes and specialized trucking trailers and determined that it was possible to ship a completed assembly in a vertical position by using double-drop trailers, which are designed for loads with issues such as height restriction. The team calculated that the double-drop trailers securely loaded with the assemblies and fixtures would have a load
height of 13 ft 3 in., which is within height limits. This meant that special permits to transport the pump assemblies would not have to be obtained from local municipalities. As a result, travel permit fees were avoided and travel routes were not limited because of bridge/underpass height restrictions.

Using the custom fixtures and a revised installation procedure provided for much safer and easier handling on-site. Four additional on-site shifts, two high-risk rigging activities, and two medium-risk rigging activities—such as flipping the 6000 lb filler piece using a forklift—were eliminated for each pump overhauled. Eliminating the medium- and high-risk activities significantly increased the safety of the work environment at the nuclear plant.

After comparing the costs of the 2013 refueling outage with outage expenses for 2012, Calvert Cliffs reported an estimated dollar savings of about $150 000. Plus, that estimate did not include a dollar value for the savings achieved from the significant reduction in time and resources, two perennial outage challenges. 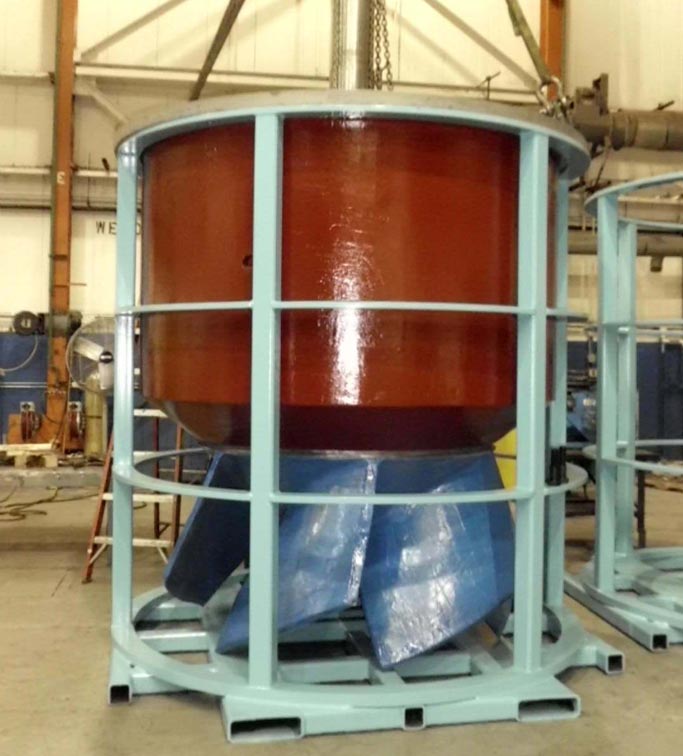 A circulating water pump assembly inside the fixture